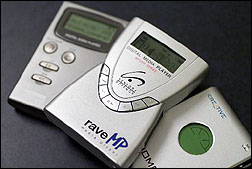 (CelebrityAccess News Service) — While there are a variety of reasons contributing to the downturn in music sales, the twin problems of downloading and burning are clearly the most potent ones, according to a recent national survey of 12-to-44 year olds conducted by Edison Media Research for the trade publication Radio & Records. The data suggest that, in particular, the heaviest downloaders have the most negative influence on sales.

"Our study should put to rest the notion argued by some surveys that say downloading actually helps sell records," says Jayne Charneski, vice president of Edison Media Research. "While some people do indeed say that they have learned about music and gone on to buy CDs because of downloading, the gains are more than negated by lost sales due to people downloading music or burning (making digital copies of CDs)."

Some of the interesting behavioral trends to emerge from this study include:

* Among the heaviest downloaders, those who have downloaded more than
100 music files (about 16% of 12-44s), reported purchases of CDs has
dropped an incredible 61% from last year's study (28.9 CDs, on average
per person, purchased last year compared with 11.3 CDs purchased this
year).

"Today's heavy downloader tends to be the same person the record
industry has relied on in the past to be the heavy purchaser. These
days, many in this group are increasingly downloading from
file-sharing sites and burning music instead of buying music," says
Charneski.

* 71% of heavy downloaders say that "Instead of buying a CD they have
burnt someone else's copy of a CD," and 48% of them say "They no
longer have to buy CDs because they could download music for free over
the Internet."

* More teens than ever are burning instead of buying — 61% of
12-17-year-olds have burned someone else's copy of a CD instead of
buying their own copy, a 13% increase in one year.

Not all of the results bode poorly for the record industry, however. Some of interesting attitudinal trends to emerge from this study include:

* 14% of those who download told us they won't download music for free
because they feel artists and record labels should be compensated.
This is a tremendous increase from 2002 when only 5% of downloaders
felt this way.

"I think we are seeing some evidence that the anti-piracy campaigns
waged by the RIAA and the record labels are starting to change the
hearts and minds of consumers when it comes to file-sharing services.
There is a growing group of consumers who want to pay for their
downloads," explains Charneski. "Meanwhile, Apple's I-Tunes came
along and raised the bar in the online music store space. I-Tunes is
easy to use and Apple's name gives paying for downloads an element of
cool. All this is great news for the record industry."

* 12-to-24s buy into the media's "bling bling" portrayal of the music
industry. Half believe that all recording artists and record label
employees are rich, live in big houses, and drive expensive cars!

* 12-to-17s: the Hip-Hop Generation. When asked on an unaided basis to
name their favorite musical artists of all time, three Hip-Hop artists
occupied the top slots — #1 Tupac, #2 Eminem, #3 50 Cent.

* Led Zeppelin's "Stairway to Heaven" ranks as the top favorite song
among 12-to-44s. Garth Brook's "The Dance" holds the #2 spot.

* Videogames sell music — 8% of 12-to-17s and 10% of 18-to-24s said
hearing a song featured in a videogame was influential in purchasing
the last music CD they bought for themselves.

* Consumers in the demos the record industry traditionally relies on for
the bulk of new music sales (12-to-24s) still believe the industry is
producing quality product and the vast majority (74%) are as
passionate about music these days as they used to be.

* 33% of downloaders said they would disable their file sharing software if they received a pop-up message warning they are at risk for legal penalties for downloading music from file-sharing services. – Edited by Bob Grossweiner and Jane Cohen