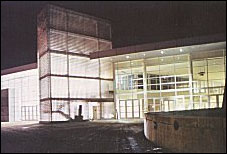 (CelebrityAccess MediaWire) — Global Spectrum, operator of the Whittemore Center Arena at the University of New Hampshire in Durham, NH, named Jim Wynkoop, a 10-year veteran of facility management, as the new general manager for the 6,000-seat, multipurpose arena. He was previously the assistant general manager for the Global Spectrum-managed Colonial Center at University of South Carolina in Columbia, SC.

"Jim Wynkoop has outstanding experience operating facilities similar to the Whittemore Center Arena, and will be a perfect fit to achieve the objectives and goals of the University of New Hampshire," said Global Spectrum President Michel Sauers. "He will work closely with Anthony Zizos, the university's assistant vice president of business affairs, and his staff to ensure that the Whittemore Center Arena continues to be one of the finest facilities of its size in the country."

"Global Spectrum has done a good job for the University over the past nine years," said Zizos. "Michel Sauers has recruited highly professional and very able general managers during this time and I very much look forward to working with Jim."

Wynkoop, a native of Philadelphia, will oversee all of the day-to-day operations of the Whittemore Center Arena, including marketing, sponsorships sales, advertising, booking and event scheduling and operational details. Prior to his new position, Wynkoop handled similar responsibilities for the 18,000-seat multipurpose Colonial Center since the facility opened in 2002.

Prior to joining Global Spectrum, Wynkoop was general manager of the Polar Ice Entertainment, Inc, in Peoria, AZ, and Cedar Rapids, IA (1999-2002). He also spent six seasons as the director of operations and event services manager for the Nassau Veterans Memorial Coliseum in Uniondale, NY (1993-99. –Jane Cohen and Bob Grossweiner