“During Burning Man’s high-demand Main Sale on Wednesday, April 10th, we experienced some system issues, frustrating people trying to purchase tickets,” Arnone said. “This is not consistent with how we conduct business, nor was it consistent with how our first several 2019 Burning Man on-sales performed. I want to acknowledge the disappointment, anger, and frustration experienced as a result and apologize for it.”

Arnone goes on to explain that shortly after ticket sales went live, the company noticed an “Isolated service performing slowly.”

Because the automated system didn’t respond as quickly as ShowClix anticipated, “we made the decision to manually intervene. Obviously, that didn’t go smoothly but Arnone said “bots” were not the problem.

Billboard noted that the meltdown came as CEO Marian Goodell has been attempting to bring Burning Man back to its roots and out of the control of Instagram influencers, which may have reduced the number of tickets that went on sale.

Burners are used to waiting in a queue, hoping to get tickets to the event in Nevada’s Black Rock Desert but apparently, this ticket Main Sale was particularly frustrating, filled with unexplained technical issues.

Approximately 23,000 tickets and 10,000 vehicle passes were offered but this time luck of the draw wasn’t in play. Burners were in the digital queue for nearly an hour and a half before the following statement from Burning Man was issued:

“We are experiencing unexpected technical issues with today’s ticket sale. We’re sorry for the difficulty and are looking into what happened. We will share more info when it’s available. #burningman #ticketing #blackrockcity #brc2019 #bmantickets.”

The backlash was unsurprising and swift.

The issues ranged from potential buyers getting kicked out of the queue to getting a notice that they were cheating. Others were told tickets were sold out while their Burning brethren were still buying up ducats, according to Mashable.

Also, there was talk of “hidden buttons” and requests for nonexistent access codes that made for conspiracy theories that some Burners had a special inside line.

Oof, there’s a hidden button you need to click to get burning man tickets pic.twitter.com/8DnOCNDqvD

Somebody has any idea what to do from here?!#burningman the site is stuck! pic.twitter.com/Y5cAxsajAV

burning man tickets… site crashed on me and my wife… re-up and at it again… pic.twitter.com/UFcrHUDGsQ

Clicked Pay, got an error and crashed out- so so cruel! #burningman #burningman2019 pic.twitter.com/0bmcZBAYUi

About three hours into the sale, without further updates from Burning Man, many refreshed their browsers to learn they were now too “early” for the sale.

hey @burningman what’s going on? hit the sale at 12:01pm PDT and waited in que 4hrs before this happened pic.twitter.com/ZApnmUrtyD

Finally, refreshing a browser would bring up the notice that the sale was over.

Been in the que since 12:01, refreshed the page 10 mins ago….. then got this message!!!! Absolutely livid pic.twitter.com/zD6jkE8Qu0

About 15 hours ago, Burning Man posted that the sale had ended, without further explanation but added that “there are many more ways to get to Black Rock City. Learn more here about the Secure Ticket Exchange Program and the OMG sale.”

That didn’t seem to work, either: 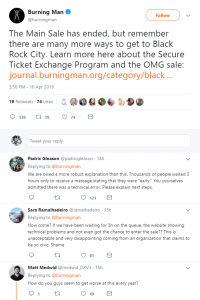