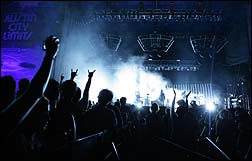 Austin (CelebrityAccess MediaWire) — Just as another ACL Music Festival is collected and carried out of Zilker Park, planning for the 2007 event is underway. Organizers announced that the musical melange will plug in September 14-16, 2007. No artists can be disclosed at the moment, but producers Capital Sports & Entertainment and talent buyer Charles Attal Presents promise the same eclectic mixture of legends, shooting stars, and new discoveries.

This year's festival maintained its high standard, and earned a nomination for Billboard's "Top Festival" of the year. The 2006 show featured headliners Tom Petty and the Heartbreakers, Willie Nelson, and Van Morrison on one musical pole, with Massive Attack, the Raconteurs, and Matisyahu on the other—all coexisting in harmony in Zilker Park.

The only potential peccadillo in the show ended up a bit of magical serendipity, as a rainstorm threatened to cut short Tom Petty's Festival-closing set. In an only-in-Austin kind of moment, he happily told the soaking crowd to stick around for "about 30 minutes or so while we cover our gear, and we'll be back to play a nice long set." These are not the words of a pampered superstar, but an eager performer and purist who truly was enjoying his time in Austin.

Asked what's in store for 2007, Charlie Jones, executive producer of Capital Sports & Entertainment, was stealthy but animated. "Our goal is a perfect event—one that honors the fans and the ACL legacy. Be assured that there will be no letting up. We will always challenge ourselves."

As promised, weather was merciful with some much-needed rain and more humane temperatures than in 2005, as well as man-made shade, increased drinking water stations, misting areas, and an enhanced Parks and Recreation Department irrigation program that resulted in greener, thicker turf.

Zilker Park, the beloved green expanse that shares the spotlight with the music, once again dropped the jaws of those unfamiliar with Austin's green jewel. To help ensure its—and all other parks'—maintenance and enhancement, a percentage of gross revenues from the Festival goes to the Austin Parks Foundation (APF). This relationship increases the opportunities for all Austinites to directly benefit from the popularity and success of the ACL Festival by putting more dollars into park system improvements and activities. Charlie McCabe, APF's executive director, is thrilled with the foundation's first year association with the festival, and looks forward to a long-term association. "We're very excited that our share of proceeds from the Festival will allow us to greatly expand our efforts in funding many needed park improvements across Austin." Every year the ACL Festival pays the Austin Parks and Recreation Department for its use of Zilker Park, which covers the rental fee, Park police officers and other expenses. By partnering with APF, the Festival is able to channel additional funds directly into park improvement projects.

In addition to park improvement, the Festival attracts music fans from all over the world to Austin, bringing in a preliminary estimate of $27.1 million into the economy.