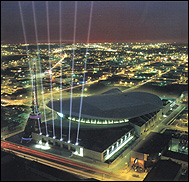 NASHVILLE, TN (CelebrityAccess MediaWire) — A band of investors hoping to purchase NHL team The Predators and their home The Sommet Center has added a twist to their proposal – they want to turn the Sommet Center's rehearsal space into a 3,500 seat concert hall, the Tennessean has reported.

According to the report, the proposed hall would cost the tax payers in the city some $2 million dollars but add another attractive option for touring artists.

"Probably 80 percent of the shows out on the road today would play in a venue of 3,000 to 4,000 seats or smaller," Tony Conway, prexy of Buddy Lee Attractions told the Tennessean "It's always great to have any size venue in a city the size of Nashville so we don't lose opportunities for tours."

The team of investors, led by David Freeman put $10 million down in August to indicate their sincerity and have been in negotiations with the city about securing funding for the deal and the details of the lease last week, Predators owner Craig Leipold deigned to give the group more time. Leipold is looking to sell because he reportedly lost an estimated $70 million in his 10 years of ownership, hence the team of investors looking for alternate ways of turning a profit.

"Building out the rehearsal hall would add another music venue downtown and be another source of revenue to counter the expense of running the Sommet Center," said Janel Lacy, a spokesman for the city's mayor.

The group's plans are long term too. According to the AP, they are also hard at work lobbying the city to build a new convention center, conveniently located to the Sommet Center

"If you project forward five or six years, you've got the front door of the convention center 150 feet away," said Joe Hall, a spokesman and lobbyist for the investors told the Associated Press. – CelebrityAccess Staff Writers