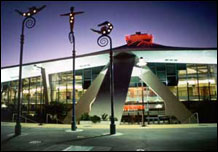 SEATTLE (CelebrityAccess) — AEG Facilities along with its regional coalition of allies, Seattle Partners, announced that they had withdrawn their bid to oversee the renovation of Seattle's Key Arena, a facility they have managed for more than a decade.

The AEG-led Seattle Partners was just one of two groups competing to submit proposals to renovate the arena. Tim Leiweke's Oak View Group was also involved in the bidding, submitting a $564 million plan that appeared to be favored by the City, according to local NBC affiliate KING.

"We remain firm in the belief that our proposal best serves the people of Seattle, but, unfortunately, significant factors through the bidding process have eroded our confidence in the ultimate execution of this project, no matter which group is selected. We fear the City is driving toward an unrealistic financing structure, and we believe the City has failed to conduct a sufficiently thorough, objective and transparent process to properly evaluate the respective strengths and weaknesses of the two proposals and, most significantly, to identify the proposal best positioned to deliver a project consistent with the community’s interests."

Newman went on to take the City of Seattle to task for what he described as an unfair bidding process:

"The City’s decision to withhold critical financial portions of Oak View Group’s proposal from the public, while releasing the financial details of our proposal with our full support, raises serious questions about the integrity of the decision-making process and the ability of the public to make a fair and equitable comparison."

"As I have said previously, our project is 100% privately financed and built with 100% private proceeds. With our partners MSG and Live Nation, we have assembled the best team in the sports and entertainment industry. Our chief objective is this: provide the best financial deal for the city, an exemplary public-private partnership, and build Seattle a showcase venue for professional sports, music, and entertainment. While we are still engaged in the RFP process, we have no further comment. We look forward to the mayor’s decision."