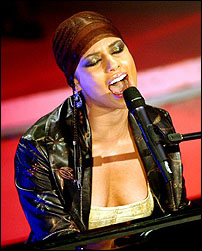 Antigua, (AP) — A concert in Antigua by Grammy Award winning rhythm and blues singer Alicia Keys was canceled because the concert's promoters didn't pay her appearance fees, her agent said.

The concert, scheduled for Friday night, was advertised as the first of a Caribbean tour. The amount of the contract was reported to be $60,000.

"The promoters … did not live up to their contractual obligations," said Keys' agent, Rob Light of the Beverly Hill-based Creative Artists Agency, in a letter sent to Antigua Junior Finance Minister Asot Michael.

"Their total disregard for the agreement left us great concern as to the viability of the production, ticketing, and security," Light said.

Concert promoters in Antigua, Tower Promotions, blamed co-promoters Itchi Baba of Trinidad and Baby Brother of Miami for the failure to pay.

The co-promoters did not say why they failed to pay. But Itchi Baba manager Al Taylor and Clarence Smith of Baby Brother said on Thursday in a press release that they approached the government of Antigua and Barbuda for assistance in salvaging the show.

By that time Keys' management refused to continue with the concert and requested the show be postponed, the release said.

Light said the Antiguan government "has been incredible in trying to resolve this unfortunate situation" and the government would like "to try and reschedule (the) show for September." The government did not comment on the matter.