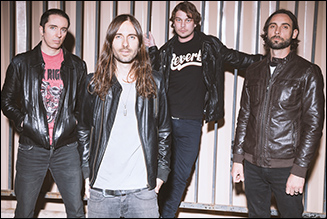 (CelebrityAccess) –The Southern-Cali based hard rock band, AEGES, are a venerable freight-train of dizzying dual guitar harmonies and bad-ass grooves that are best likened to a propulsive mix of Queens Of The Stone Age meets Soundgarden. Find out for yourself by downloading it now at the link below it’s out everywhere now.

ÆGES has made the improbable marriage of massive extremes their hallmark, steering beyond the simple combination of sonic crunch and melodic hooks into a hypnotizing and enchanting lane occupied by pioneering acts like Queens Of The Stone Age and Soundgarden.

For their first album with Another Century, ÆGES worked with veteran rock producer Bob Marlette (Black Sabbath, Shinedown, Rob Zombie, Seether) and mixer/Saosin guitarist Beau Burchell (The Bronx, Emery, Middle Class Rut), with additional production on a couple of the Weightless tracks handled by the band themselves.

The Bridge (2012) was a guitar driven affair whose singular focus gave way to the even bigger sonic tapestry found on Above & Down Below (2014), cementing ÆGES as four players with distinctive strengths that combine to make something virtually unrivaled today, as clearly evidenced by every single song on Weightless.

The new record from ÆGES takes listeners on a journey to a place somewhere between The Green Album by Baroness, Colour & The Shape by Foo Fighters, and Superunknown by Soundgarden. Weightless is fully charged by powerful guitars, pounding drums, rich melodies, and delays veering between dense and sometimes sparse.

Massive sonic heft, magical melodies, odd-time signatures and raw power cohabitate with transcendent catchiness throughout, as various combinations of sonic strength and spacey noise build tension that is both organic and dramatic, earning each of the album’s biggest moments with authentic earnestness. ÆGES has mastered the slow psychedelic jam as well, intertwining all of these elements with desert rock, flashes of prog, and thick guitars that ebb and flow.

ÆGES is prone to experiment with dissonant sounds without the pretensions of art-rock; they swing for the fences with unabashedly huge vocal hooks, without the vapidity of pop rock. This is a band with unstoppable potential, owing much to the fact that they can shake the earth with grandiose bombast without the boundaries, and limitations of hard rock, hardcore-punk or any associated subculture.

With nothing tying ÆGES down, their future is truly Weightless.