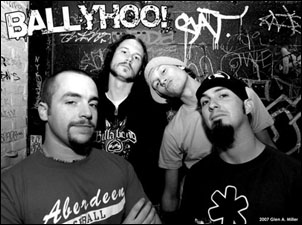 BALTIMORE (CelebrityAccess MediaWire) — Ballyhoo!’s sound, devotion to the road and to their fans,

position of America’s feel good party band. They didn’t get here by accident;

rather, they have single-handedly grown their empire through unparalleled

hard work and dedication until Jan 2011, when they got a well-deserved nod, signing with the Hawaii-based indie label LAW Records. Yesod

says of his newest addition, “Having Ballyhoo! join the LAW Records family is a

perfect fit. They are an incredibly talented band with a really catchy style”.

Now, with the backing of LAW, 2011 promises to be a paramount year on

Ballyhoo! has toured the country with some of the biggest and most respected

“It’s always intimidating when playing for another band’s crowd, you never know

how they’re gonna react,” explains front man Howi, “but then you see that

they’re enjoying it and the worry goes away. You’re free to rock at that

point!”. Ballyhoo! will start their tour of the southeast with fellow label

base. Ballyhoo! fans are some of the most loyal and enthusiastic fans out there

and their love for the band runs deep.

1 – Where did you come up with the name for your new CD, DAYDREAMS?

Howi Spangler: It came from a lyric in one of the new songs called

"Sandcastles". "Just like a daydream, it feels so amazing, don't wake me up."

better place. This is relatable to daydreaming at work or school, its always

better in a daydream, ya know?

Then the art work came to mind. I had this vision of a moon and a sun,

representing the dark times and the positive good times. The floating "yellow


2 – What was your inspiration for the whole album?

H: We didn't really have a direction or theme for the album at first. We started

out with about 21 songs and jams. As we worked through them, I started getting

ideas for the lyrics and subject matter from the way the music made me feel.

at you. Questioning love life, seeing people for who they are, good and bad.

I've always been a bit of a pushover and getting older, I've learned to stand up

and speak more than ever.

We took all of that and tried to make a positive, uplifting piece of music so

"Ricochet", says simply "Don't look away, you're gonna make it there someday".

3 – Are you doing anything special to celebrate the release on September 6th?

Scott Vandrey: Well I’m sure we’ll crack a bottle or two of bubbly or something

to celebrate on the 6th! It will be the second day of tour with Pepper so we’ll

definitely get those guys in on the celebration. As for an actual record release

party, we won’t be able to do that until we’re back home, and we’re planning on

tying that it with our 5th Annual Halloween Monster Bash at the end of October.

a while now (guess how many years!). It’s usually our biggest show of the year

that we put on, so adding a record release celebration to it should make it a

4 – What is your favorite track off the album?

H: "The Getaway" is a slammer. I love that one. It's one of those songs I always

wanted to write. I had the intro riff and the basis for the chorus and we

started jamming in the studio. JR came up with the Soundgarden/311 bridge line

and it turned out awesome!

I love "Evil Penguin" for the same reason. Just slams all the way through.

S: My favorite has been rotating since we recorded; right now I’m really

feeling ‘The Getaway.’ It starts out rocking, has a driving verse that reminds

me of an old western horse chase, a huge chorus, and it finishes with an

anthem-like chorus reminiscent of ‘Bro Hymn’ by Pennywise, who have been one of

my favorite bands since the mid 90’s. It also has one of the most randomly

awesome and awesomely random drum fills ever right in the beginning. Finally,

say were influenced by my days of producing Drum and Bass tunes.

how was it shooting your first music video?


S: The video will be coming out a few days ahead of the record. Initially it

will be exclusive to MusicBailout.net for a few days, but then it will be on all

of the typical online hosts (YouTube, Vimeo, Facebook, etc.).
I had an absolute blast shooting the video! Basically spent a perfect day in a

cool beach town in Florida, riding around town on a scooter with a beautiful

girl! Hard to complain about that… The ‘acting’ scenes were a little weird at

first, as was the lip syncing and playing with nothing plugged in for the live

shot, but we got used to it all after a couple takes. Definitely a new

experience! Looking forward to the next one for sure.

The Expendables and your LAW Records label mates, Pepper…what are you looking


S: Definitely looking forward to hanging with the Pepper guys again, have

stage. We’ve been playing the same circuit with The Expendables for YEARS now,

but have never met the guys or played a show with them, so very stoked to

finally do that. It’s also going to be a nice change to do a big national tour

as an opener. I love headlining shows, but there’s certainly something to be

said for getting done early and being able to crack a beer, relax, enjoy the

other bands, and mingle with the crowd after our set.


7 – If you could do a national tour with any 2 bands (still together or not),

which ones and why?


S: Hmmm…excellent question… SLAYER AND SLIPKNOT!!!! I think their fans would

LOVE us!! And I would never get sick of watching their sets…


Realistically, I would love to do a tour with RX Bandits. Have been a big fan of

their music for a few years and have seen a couple live shows, which are

absolutely fantastic. Their energy level on stage is through the roof, and

that’s something we strive for ourselves. It’s always easier to achieve that


We’ve done several shows with 311 in the past, and based on those experiences, I

would love to do a full national tour with them. Besides the obvious reasons

professionals at every aspect of touring and putting on shows. Every time we’ve

done a show with them, we’ve learned something new about the behind-the-scenes

8 – If there was ONE thing about your band that you wanted everyone to know,

what would it be?

H: We can change a tire fast as shit! We're seriously one rachet-turn from being


S: WE AREN’T GOING AWAY!! We’ve been at this game for a long time. It’s been

a crazy and often times difficult journey, but it has always been progressing

onward and upward. Thanks to all our fans who’ve supported us along the way!