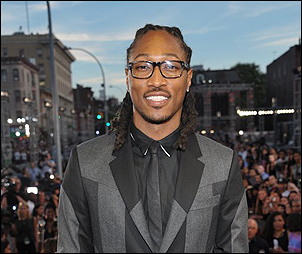 It's a pretty impressive list: Pharrell, Drake, Kanye West, Andre 3000, among others, as well as the Atlanta auto-crooner and producer himself, who's got the Midas touch — if everything Midas touched turned to platinum. That enviable list made "Honest" one of the year's most anticipated releases.

He chose lead single "Move That Dope," a Mike Will Made It track featuring Pharrell, Pusha T and Casino, because he felt it captured spring 2014.

"This album isn't even about the hits, it's about the moments," Future said in a recent interview. "The moment of having Skateboy P (Pharrell) do a verse in the same time that he's doing songs like 'Blurred Lines' and 'Happy,' he's doing pop records and you get him to do a verse on 'Move That Dope.' I'm making moments and people don't understand that. But in 10 years people are going to go, 'Man, he had Skateboy P and Pusha T on the same record in the time when Pharrell was getting nominated for Oscars.'"

Future thinks the result is a very personal album, something he found easy to do despite the expectations. He mixes sometimes-inspirational songs like "Blood, Sweat and Tears" and "Special" with star turns that nonetheless show an aspect of his life or personality.

Kanye West joins him on "I Won," a song about the women in their lives (Future is engaged to Ciara; West to Kim Kardashian). Drake appears on "Never Satisfied," a striving feeling the two hitmakers share. Old friend Andre 3000 sends up status climbers on the ATL-all-day "Benz Friendz."
Their presence shows just how hot the 30-year-old hitmaker has become.

"I actually had to get another cellphone number because all the people from the past who had the number kind of used it and were blowing it up and passing it along to other people," Future's manager, Orlando McGhee, said with a laugh.

Future says he doesn't mind the calls.
"I get excited about every call because every call I feel like I have to deliver," he said. "Whoever calls, I want to be able to deliver and do something special. Everyone wants a hit."