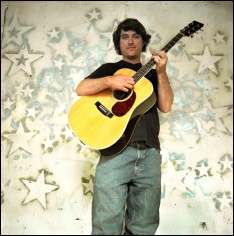 BOULDER, CO (CelebrityAccess MediaWire) —
Keller Williams, multi-instrumentalist and musical innovator, has been described with quite a few complimentary adjectives: “one-man band,” “music’s mad scientist” and “multitasker supreme.” While oftentimes noted for his zany and eccentric personality, the focus always ends up coming back to Keller’s technical ability and prolific songwriting. With such emphasis on his attention to experimentation and virtuosity, it seems rather intriguing that Williams would even consider labeling himself a “Thief.”

Yet the title of his new release, out May 25, 2010, is merely a self-reflective joke, a tongue-in-cheek stunt that is more than familiar to those already initiated into the clever and creative world of Keller Williams. A collection of bluegrass cover versions of songs, Thief leads the listener right into an exploration of Williams’ musical antics. With tracks originally performed by artists ranging from Kris Kristofferson to Amy Winehouse, the album represents Williams’ unique ability to deconstruct preconceptions and transform a song into a completely different form.

“A lot of times these songs choose me and they creep up into my brain. The next thing I know, I’m singing these songs,” says Williams as he explains the thought process behind how he chose and compiled the covers for Thief. “I’m waking up singing them and going to bed singing them. It takes learning them and performing them, and sometimes recording them, to get them out of my head.”

Serving as a follow up to 2006’s Grass, Thief delivers a collaboration with Larry and Jenny Keel; a collaboration that Williams is not only committed to, but also thoroughly enjoys. “Together we’re a very loose bluegrass entity. We have a good time, and above all else that is our goal,” explains Williams. “I think us folks on stage are possibly having more fun than those in the audience!”

Williams will be teaming up with the Keels for select festival appearances this summer, but it comes as no surprise that Thief is just one project in a long line of current occupations for this prolific musician. Most notably, in July Williams will be joining the revolving all-star lineup of the Rhythm Devils, a group anchored by Grateful Dead alumni Bill Kreutzmann and Mickey Hart. A lifelong fan of the band, Williams gushes when asked how his involvement with the project came about. “I was invited. Isn’t that crazy?” says Williams humbly. “They called me up and asked me to be in the band, and I said ‘yes.’”

No doubt, Williams has his hands full collaborating with the Keels and members of the Grateful Dead. But it all serves a specific purpose for the artist. “I’ve spent so many years performing solo and for so long I wanted to play with other people, but I wasn’t really able to afford it. As years went by, the timing was right to incorporate other human beings in to my musical world,” Williams explains.

Today, it’s these collaborations that help Keller keep things fresh and avoid getting bored with any one project. “The solo act is my day-job, it’s what I’m most comfortable with. But playing with other people is a real joy for me,” states Williams. “I do it enough that it helps me want to get back to the solo act. And I do the solo act enough that it helps me want to play with other people. Each one helps the other out.”

As hard as Williams has worked, the bottom line has always been about entertaining himself. “My whole career is a never ending quest to entertain myself,” jokes Williams. “I think that if I’m not entertained, it’s going to cross over to the audience.” By the looks of his large and loyal fan-base, it seems that Keller, and the audience, are indeed entertained.

Entertaining himself and his audience has always been the product of Williams’ light-hearted attitude towards his craft. “I’ve never really taken this job that seriously,” admits Williams, “In the beginning, I was afraid that if I did take it too seriously – I’d be setting myself up for heartbreak.”

That never happened. Instead, Williams has established a career that can only be defined by his own desires. It’s a road that ventures off in numerous paths, but is always anchored by humor, humbleness, and a dedication to having a good time.