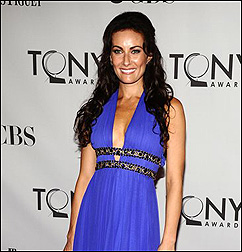 NEW YORK (AP) — Laura Benanti has been on a bit of a roll since she showed up drunk at the Tony Awards.

That was Benanti, mournfully holding a bottle of booze, onstage with "Smash" star Megan Hilty and former "The New Normal" star Andrew Rannells to skewer theater stars who seek fame on TV.

"Both my shows were canceled, it's true — no joke! Not one show, but two!" declared the actress, whose shows "Go On" and "The Playboy Club" were yanked. "And so I raise a bottle to you — television sucks!"

Since that bit of comedy, Benanti has gone on to perform in front of more than 20 million people in NBC's live version of "The Sound of Music," record the CD "In Constant Search of the Right Kind of Attention" and book a bunch of concerts. She also has a recurring role on "Nurse Jackie."

"People are getting to see a little more of who I am and what makes me tick and what my sense of humor is," the actress recently said from Los Angeles, where she was auditioning for TV pilots.

Her career's rise is all the more meaningful since her heart was broken at the time of the Tonys show: Her marriage to fellow Broadway star Steven Pasquale had ended, and the chance to laugh at the Tonys was perfect.

"I really needed that. I needed to be amongst all of those people that I love in that room and get to be funny and silly and self-effacing. I felt like from then on it was this upward trajectory. I felt the angels were really looking out for me."

Benanti, who won a Tony in the Broadway revival of "Gypsy" alongside Patti Lupone, also earned Tony nominations for her work in "Women on the Verge of a Nervous Breakdown," ''Into the Woods" and "Swing."

On her new CD, she fuses theater standards with pop music and original songs. Recorded live at the club 54 Below, the album showcases her immense charm, like the revelation that she was such a musical theater nerd as a kid that she went trick-or-treating dressed as Fosca from Stephen Sondheim's "Passion."

She talked about her CD and "The Sound of Music" in a recent interview with The Associated Press.

AP: You've left the fun, goofy stuff you talk about during your cabaret show between songs on the CD. Why?

Benanti: I want people who weren't able to get to New York to get to share the show. This way you're able to really experience it as if you were there. You just don't get to see me make idiotic faces. You can get to hear me be an idiot.

AP: Do you feel you've been getting more attention since "The Sound of Music"?

Benanti: Yes. It definitely felt like I was an overnight success after 16 years. I gained probably 6,000 Twitter followers and had a lot of people congratulating me. Being out in Los Angeles for this trip feels extremely different than it's ever felt. I feel like people are like, 'Oh, we get you now.' I felt frustrated before, like they didn't really know what to do with me.

AP: Was it fun doing a live show on television?

Benanti: What I get frustrated with is when I feel like people in the theater community were horribly cruel to Carrie (Underwood). No. 1, we have to remember that she'd never done anything like that before. Her learning curve was incredibly steep. From the first day of rehearsal to the performance, she grew in leaps and bounds. I think it takes tremendous heart and courage to come back to work every single day knowing that maybe you're not that good yet. She came to work every day and cracked her heart open and was like, 'Teach me. I want to learn.' I think she did a beautiful job.

AP: Was it more stressful than anything you've done?

Benanti: Weird things happen to me when I get incredibly nervous. I become incredibly calm. It's very weird. If I'm a little bit nervous, it's not a good situation. If I'm extremely nervous, something takes over and I am like a Buddha. So I was nervous and certainly when my skirt got stepped on, I was thrown for a minute but — and not to sound like Daniel Day-Lewis or anything — I was in that character and so my response was to respond like her, which was like smiling on the outside but on the inside it's like 'Bring me that man's head on a platter.'

AP: The next live one will be "Peter Pan." Would you do it if asked?

Benanti: Yeah. I mean, look, I would do it every year. I would love to be part of a troupe of actors that does this every year. I will do it as many times as they ask me to do it, especially if they do 'My Fair Lady.' I would really like to do that. But it'll probably be 'Ke$ha as Eliza Doolittle!' And I'll be in the background, selling roses.