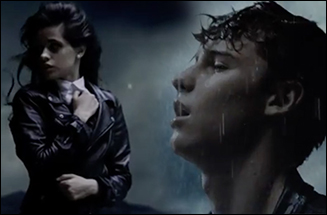 NEW YORK (CelebrityAccess) – Canada’s latest hottest export singer-songwriter Shawn Mendes is taking advantage of the hype for the recent release of his new album “Handwritten: Revisited”, the re-pack of her debut album, premiered the music video for the project’s lead single, “I Know What You Did Last Summer”. This infidelity-themed mid-tempo acoustic pop is a collaboration with Camila Cabello of Fifth Harmony.

As Fifth Harmony prepares its second album from a probable 2016 release, one of the girl group’s members, Camila Cabello, has taken a quick solo detour to help out her pal Shawn Mendes with a duet. “I Know What You Did Last Summer,” their joint single from Mendes' Handwritten Revisited reissue, was released earlier this week, and Cabello told Fuse that the experience of unveiling the duet with the Canadian singer-songwriter was a moving one for her.

“This song meant a lot to me … it was almost like getting to explore the acoustic-storyteller part of me,” says the 18-year-old singer. “When it came out at midnight [on Wednesday], I received texts from all my friends who knew I was working on it, who I sent GarageBand recordings of me writing my own songs, and them just being like, ‘I’m so proud of you.’ I had a good 10-minute cry. I was FaceTiming with Shawn at the time, and my mom in a room. I was like, ‘I’m so emotional right now!’”

Cabello says that “I Know What You Did Last Summer,” which she and Mendes performed on Live with Kelly and Michael on Friday morning, November 20th, chronicles a real-life situation of romantic betrayal. “It was something I was going through at the time,” Cabello explains. “Basically, I was talking to this boy—it was literally three days before we wrote the song. My friend had called me and was like, ‘Hey, this boy that you’re talking to is hitting me up and trying to flirt with me.’ I really liked him a lot, so the inspiration for me was when I found out that he was not involved with just me. I confronted him, and obviously we weren’t a thing anymore. That’s why I connected to it so much.”

The good news for Cabello is that the process of co-writing the single with Mendes, whom she met in the summer of 2014 when Fifth Harmony and Mendes were on tour together, brought the two closer together as friends. After beginning the creative concept backstage at Taylor Swift’s 1989 tour last summer, Mendes and Cabello ended up trading countless text messages and spending multiple days making sure the song’s mix was pitch-perfect.

“I can honestly say that [Shawn] is one of my best friends now—we talk all the time,” says Cabello. “He’s my life coach. I’m just so irresponsible about things, and he’s always like, ‘Camila, you lost your voice because you’re not drinking enough water! Are you eating good food?’ Whenever I have a crisis, he goes, ‘You need to breathe in and breathe out,’ and gives me a pep talk.”

Shawn & Camila stopped by Elvis Duran and the Morning Show on November 18th, to promote "IKWYDLS" and they got real about the rocky songwriting process. "We had many arguments," dished Camila. "We would just be talking on the phone and he would be like, 'Camila, I'm just as passionate about this as you are.'"

And then Shawn committed the worst texting offense known to man to get back at Camila. "Then we'd be texting each other and he'd give me one word answers," she said. "He'd be like, 'Okay…' and that's how I knew."

But in the end, all the fighting and arguments were a good sign. It meant that both Shawn and Camila cared equally about their music. "That's the cool part," shared Camila. "Because we were so passionate about this song and while we were writing it… As artists we're both so invested in what we sing about that that makes the whole experience so much more intense." Guess that's what happens when you put two musical geniuses in a room together and tell them to make music together!

For Fifth Harmony fans fearing that Cabello is going solo: Fear not. The singer says that she’s beyond excited about the girl group’s follow-up to their 2015 debut, Reflection, which they’ve been working on with Max Martin and his team of super-producers. “We really worked very, very hard on this album, and we wanted to make sure it was perfect, especially coming after Reflection,” she says. “It’s such a different thing than we were doing before. I think vocally, we’ve improved a lot on this album. You get to hear every girl doing something different, something that they’ve never done before.” When asked about a potential release date, Cabello says, “I have no idea. Nothing has been confirmed yet. We’re far ahead into the recording process, but we haven’t picked out the songs yet that we want to see on the album. It’s not that far along yet. I hope to see it out by the first half of the year next year, but I can’t make any promises.”

Reflection featured the Top 40 hits “Sledgehammer” and “Worth It,” as well as guest spots from Meghan Trainor, Tyga and Kid Ink. Cabello says that she and the rest of 5H already have a few features in mind for album number two.

“The girls have said that we hope to have a Nicki Minaj feature, but there’s nothing confirmed yet,” says Cabello. “She would be a dream collaboration. Beyonce would be cool. Ed Sheeran would be cool.”

What about Mariah Carey, whom Fifth Harmony nodded to on the Reflection song “Like Mariah”? “I feel like we could do that, too, because we’re label mates now!” Cabello exclaims. “We’re going to have to make a couple phone calls.” – Jason Lipshutz