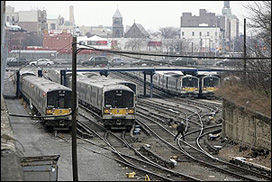 NEW YORK (CelebrityAccess MediaWire) — An federal judge has upheld the use of eminent domain in the proposed Atlantic Yards project, clearing one of the few remaining hurdles for the new arena complex for the New Jersey Nets.

The massive $4 billion Atlantic Yards project is a proposed development, a part of which encompases a run down industrial region in Brooklyn. The project will include a new arena, 16 skyscrapers and residential and commercial space. Development had been held up by a lawsuit launched by 15 property owners who's buildings had been condemned by the city to make way for the Yards.

The property owners had claimed that the use of eminent domain violated the Public Use clause of the Fifth Amendment, however the U.S. Second Court of Appeals did not agree, noting that much of the development would be publicly owned and just leased to the Nets organization.

"Once we discern a valid public use to which the project is rationally related, it makes no difference that the property will be transferred to private developers, for the power of eminent domain is merely the means to the end" the court said, referencing in part, a prior decision.

The project will recieve significant contributions from the public till, with both the city and the state of New York agreeing to each pony up with $100 million.

Shortly after the decision, New York Mayor Michael Bloomberg announced the appointment Seth Pinksy as the new president for the New York City Economic Development Corporation, the city's "primary vehicle" for implementing its 5 borrough development plan, under which the yards fall.

Pinksy has been with the corp. since 2003, serving in a number of roles and before that, he was an associate with the New York law firm of Cleary, Gottlieb, Steen and Hamilton for five years. He also served as a financial analyst in mergers and acquisitions at James D. Wolfensohn Incorporated.

"Having worked with Seth at EDC, I feel confident that he's the best choice to take over and continue the vast array of projects in all five boroughs," said Deputy Mayor for Economic Development Robert C. Lieber "Seth's knowledge and experience of the projects in the EDC portfolio, including his direct leadership on many of the most visible, well help us advance them. It's all about creating jobs and improving the quality of life in all five boroughs, and Seth has the knowledge and skills to help us do that." – CelebrityAccess Staff Writers