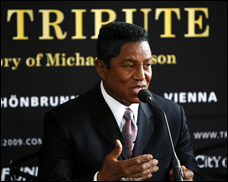 VIENNA Austria (VIP-NEWS) The Austrian company that was organizing a global Michael Jackson tribute in London said Friday it is being dissolved and will not be able to put on a star-studded show in honor of the King of Pop.

The company – now officially known as World Awards Media GmbH in Liquidation – said in a statement that the decision to dissolve the firm was made at the end of November. The statement did not provide any details but liquidator Martin Schneider said the main sponsor had decided to no longer financially support it.


Former chief promoter Georg Kindel told the Austria Press Agency that he did not know if Jackson's brother Jermaine would go ahead with the concert – set for London in the first half of June 2010 – on his own.


Jackson and Kindel had initially said they would stage the tribute outside Vienna's Schoenbrunn Palace on Sept. 26 but moved it to London's Wembley Stadium after running into problems.


At an early September news conference, they said too many top performers had scheduling conflicts, and blamed the media for stirring up a negative atmosphere. Jackson had previously said that Vienna was picked as a venue because his brother "loved castles."

In Friday's APA interview, Kindel said he and Superfund founder Christian Baha – the majority owner of the now defunct company – split in October. A day later, both men "suggested" to Jermaine in Los Angeles that World Awards Media would no longer be able to organize the tribute, Kindel added.


Kindel's comments to APA suggest he and Baha did not part on good terms and that Baha broke off the partnership.


"I believe one could have done this differently, amicably and without any commotion," APA quoted Kindel as saying. –According to Billboard