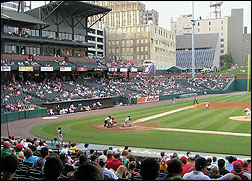 MEMPHIS (CelebrityAccess MediaWire) — Baseball's still the thing at AutoZone Park, but the Downtown Memphis stadium is being marketed for concerts and large-scale corporate events by local firm Resource Entertainment Group.

"I think that we have a great new outdoor venue in this market," said Howard Stovall, a partner in REG, an entertainment services company. "While production costs are higher than other outdoor venues in Memphis, the venue has two major advantages. First, it offers more seats, and second, promoters can market to an extensive baseball ticket buyer database prior to the onsale date. And, the Redbirds’ season ticket buyers have been enthusiastic buyers of concert tickets in the past."

The venue has been around since 2000, but is little more than a rookie as an on-field concert venue. In 2005, it was a stop on the Bob Dylan-Willie Nelson tour of minor league parks, and also was host to the Voodoo Music Experience, part of which was moved to Memphis from New Orleans because of Hurricane Katrina. "We have started the process of letting the promoter and touring community know that the ballpark is ready and waiting," Stovall said.

Information on the venue is available at memphisredbirds.com.

Redbirds president and general manager Dave Chase said, "What I would hope for is either a concert late in the season or early in the fall. My perfect scenario is that we have probably two concerts per year — one during the baseball season and one in the fall every year." Stovall said the ballpark — ideal for concert crowds of 7,000 to 8,000, using the field as well as the stadium seats and suites — won't be right for every show, in part because the playing field must be protected at all costs. "The bottom line is, if the field is not up to snuff and the Redbirds have to cancel a baseball game, then the idea of having concerts at AutoZone Park does not seem quite as enticing as it did moments ago.

Turf protection is the one major added cost for the venue," Stovall said. Along with concerts, REG also envisions a variety of large corporate events — for example, a dinner for several hundred, on the infield, with live entertainment. "It is such a beautiful spot to have that type of outdoor event that I'm very confident that corporate clients will be interested in this, even though the price tag's pretty steep," said Stovall, estimating that an on-field event might cost a company $11,000, including staffing. – CelebrityAccess Staff Writers