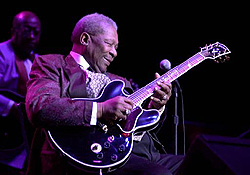 Blues legend BB King is featured in a new series of Burger
King ads for the fast food's new King Supreme and
Egg'wich sandwiches that will air on network and cable television
and radio. The ads start airing Sunday, January 13.

This past fall, Burger King® customers voted King "Living Legend'' from among a list of music
greats, including Aretha Franklin and James Brown.

"When we developed
these new sandwiches, we asked him to star in the commercials to lend his musical talent and to
acknowledge our customers' tastes not only in food but also in music," said Craig Braasch,
vice president, Global Advertising & Promotions. "BB King is a Burger King customer
favorite.''