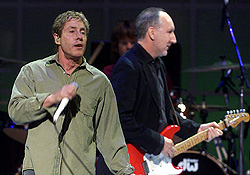 The Who are coming to America. Guitarist Pete Townshend reveals on his website that the
group is planning a summer tour in three legs, June – August, probably kicking off in Los
Angeles and winding down in the northeast.

Townshend recently told the San Diego Union-Tribune that he "made a very real
commitment now to go into the studio with the Who at the
end of October of 2002, with a producer and a record deal,
and to put out whatever we come up with, even if it's rubbish." The last time the group recorded together was for 1982's It's Hard.

In the meantime, they are planning three warm-up shows before their charity gigs at the Royal
Albert Hall in February: January 27-28 at the Portsmouth Guildhall and January 31 at the
Watford Coliseum.