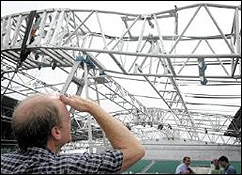 (CelebrityAccess MediaWire) — Engineers have been scouring the stage set up at the Soaring Eagle outdoor amphitheater in attempts to figure out what caused a truss over the stage to bend, forcing the cancellation of a planned Loggins & Messina concert.

Stage crews were installing a 10,000-pound video monitor when they heard a loud crunch, Mike Vautrin, CEO of the Soaring Eagle Casino told the Morning Sun.

“It bent one of the back trusses,” Vautrin said. It is still unclear whether the truss itself failed under a load far less than its design load, or whether part of the stage flooring gave way and jerked the loaded truss downward.

The truss, leased by the casino from Performance Staging of Plymouth, is designed to carry a weight of at least 20,000 pounds, Vautrin told the paper. The crews were putting together the 30-foot-high screen, bolting on rows of the LED displays, when the incident took place.

A crane was brought in to stabilize the situation. No one was hurt.

The bent truss caused organizers to postpone the concert, as they were not willing to risk the safety of performers or concert-goers.

Vautrin told the paper that a tentative date of September 5th has been set for a make-up show.

Refunds to the original show are available through Tickets Plus outlets or through the Soaring Eagle box office. –by CelebrityAccess Staff Writers