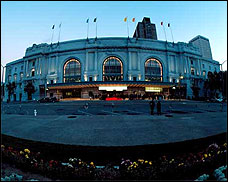 The city is working with currently facility operator SMG, representatives at AEG Live, Berkeley-based concert promoter Another Planet, and others to bring the aging venue back to life.

Several options are being looked at, such as adding sports capacity and sponsored box seating and renovating the visibility as a concert hall. The city planners are looking to bring the underused facility back into the spotlight in the heart of the mid-Market redevelopment area, which is expected to undergo hundreds of millions of dollars in new construction in the near future, according to the San Francisco Business Times.

“The idea is for Civic (auditorium) to be an economically viable community facility,” Dick Shaff, general manager of SMG, told the paper. “It has a tremendously good location in Civic Center Plaza.”

Currently, the 7,000-capacity auditorium is a tough sell to promoters, despite the 40 meeting rooms and large main hall. The Civic Auditorium is only hosting 12 events this month, and of those, only one is a concert.

According to the paper, the 1970s-style carpeting and décor, hard surfaces and a mediocre soundsystem, which muddle acoustics, and a lack of a permanent stage and seating make it unattractive to possible users.

Attendance has also lagged over the years, due in part to the area’s history. In 1994, the 90,000-square-foot exhibit space adjacent to the building closed. From 1994 to 1996, the auditorium was closed for seismic retrofitting, which moved all business to newer and nicer facilities, including the SMG-managed Moscone West, which opened in 2003.

“We’re telling the city, ‘Let’s reorient the building — make it into an entertainment, sports and civic venue,’” said Shaff, whose proposal includes adding retractable bleachers, installing a new sound system, lighting and stage to make the venue more visually pleasing and less expensive to set up. Shaff said the plans could reach up to $12 million, depending on how much is implemented. Others have estimated costs up to $25 million. –by CelebrityAccess Staff Writers