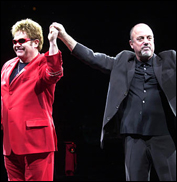 John confirmed the duo would work again together yesterday (Nov. 11) on "The View," adding that they could be on the road for "at least" two years. But sources say the extent of the pairing is still being determined.

At first, Joel and John will play "select cities" in March and May. Details of initial on-sales will be announced soon.

Regarded as the top-grossing co-headliners of all time, John and Joel first worked together in 1994 and last toured together in 2003, when they grossed $45.8 million from only 24 sellouts, an average of nearly $2 million per night, according to Billboard Boxscore.

The pair have played stadiums as well as multiple nights at arenas, but all upcoming shows will be in arenas. Sources say the format will be similar to 2003, when the artists played songs together and individually.

Ticket prices will be similar to 2003, when the top price was $175. "It's two people for the price of one," John said on "The View." "Our ticket prices are the same as you'd see anyone else, but there's two of us. In this day and age, we hope to be getting people value for their money."

It is believed the tour will work with individual promoters in each market as opposed to a national touring deal. John is booked by Howard Rose at the Howard Rose Agency, and Joel by Dennis Arfa at Artists Group International. According to Billboard