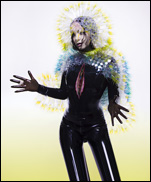 REYKJAVIK, Iceland (CelebrityAccess) — Icelandic artist Björk has canceled the final dates of her European tour, including a series of festival dates.

Björk has not offered any insight in the reason for the cancellations, with her reps stating “Due to a scheduling conflict beyond our control, Björk is not going to be able to play the summer and autumn tour as planned. Björk had been really been looking forward to the concerts and we will work on rescheduling the cancelled dates as soon as possible.”

Festival organizers also seem to be in the dark about the shows, with organizers for the La Route festival writing on the fest's website: “Despite our numerous calls and messages, no justification has been given to us so far. We feel trapped and it is with great bitterness that we must resign ourselves to accept this inexplicable cancellation which has happened only one week before the festival. We activated all our networks and we are doing everything we can to announce an artist to replace the Icelandic diva before the end of the week.” – Staff Writers