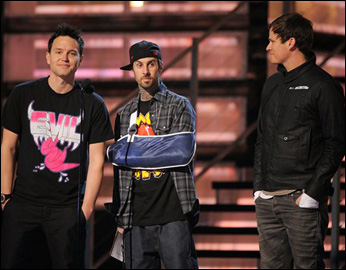 LOS ANGELES (CelebrityAccess MediaWire) –- During an appearance at the 51st Grammy Awards on February 8th, Travis Barker took the opportunity to announced that that Blink 182 was reforming.

A message on the band’s web site confirmed this resurrection of the band. “Hi, we're Blink-182. This past week there’ve been a lot of questions about the current status of the band, and we wanted you to hear it straight from us. To put it simply, we’re back. We mean really back. Picking up where we left off and then some. In the studio writing and recording a new album. Preparing to tour the world yet again. Friendships reformed. 17 years deep in our legacy. Thanks and get ready…"

The tour is to get underway in the summer of 2009 and the band is also planning a new album release. On February 19, Hoppus stated that they are six songs into the album and are hoping for a 2009 release date. According to Alternative Press — by CelebrityAccess Staff Writers