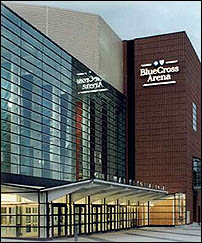 The cost of a ticket for events at the city-owned Blue Cross Arena at the Community
War Memorial in Rochester, NY will increase by 25 cents in July, according to the
Democrat & Chronicle.

SMG, which manages the facility, said it was losing too much money and wanted to
rework its financial agreement. The city will use the extra money to help SMG.

In addition, the city also will pay $150,000 more a year in utility costs, reducing SMG's
cost to about $300,000. Parking lot operations will also be turned over to SMG, who will
be free to set their own parking fees.