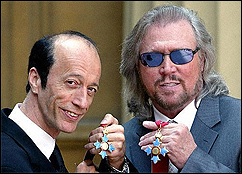 LOS ANGELES (CelebrityAccess MediaWire) — Broadcast Music, Inc. (BMI) staged its 55th Annual Pop Awards on May 15 honoring the Bee Gees as its 2007 Pop Icons; Kara DioGuardi and Sean Garrett as Songwriters of the Year; “Because of You” as Song of the Year; and Warner/Chappell Music as Publisher of the Year. The awards were hosted by BMI President & CEO Del Bryant and BMI Vice President/General Manager, Los Angeles, Barbara Cane and held at the Regent Beverly Wilshire Hotel in Beverly Hills. The black-tie, invitation-only dinner recognized the writers and publishers of the past year’s 50 most performed pop songs from BMI’s catalog of more than 6.5 million compositions.

A highlight of the ceremony was the musical tribute to legendary singing trio the Bee Gees. The brothers Gibb were honored as BMI Icons for their “unique and indelible influence on generations of music makers.” Accepting the awards were Barry and Robin Gibb, and Yvonne Gibb, wife of the late Maurice Gibb. The tribute saw American Idol finalist Katharine McPhee perform “Immortality,” Bebe Winans singing a medley of “Nights on Broadway” and “How Deep Is Your Love” and Kelly Rowland performing “Emotion.” The Rock and Roll Hall of Fame inductees signature three-part harmony has endured for more than four decades, and with this award they join an elite list of previous BMI Icons that includes Crosby, Stills & Nash, Paul Simon, James Brown, Brian Wilson, Isaac Hayes, Dolly Parton and Carlos Santana.

“Because of You,” co-written by BMI songwriters Ben Moody and David Hodges, along with Kelly Clarkson, was named BMI Pop Song of the Year for scoring the most airplay of any song on the most-performed list during the award period.