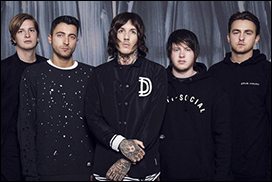 ADELAIDE, South Australia (CelebrityAccess) — British rock outfit Bring Me The Horizon have canceled their September 20th gig, after the band's frontman Oli Sykes came down with an infection.

The band was due to perform at a sold-out show at the AEC Theatre in Adelaide, Australia but pulled the plug at the last minute. The band's next scheduled gig is a two night stand starting on Thursday at the Magaret Court Arena in Melbourne. According to Live Nation, the show is a go at the time of publication.

The official statement from the band said:

“Unfortunately we have no choice but to cancel tonight's show in Adelaide. Oli has a viral infection which has caused his throat to become very infected and he is hardly able to speak, let alone sing.

“We have been looking forward to coming back to Adelaide since 2013 and we're genuinely gutted about this, this tour has been one of the best tours we've been involved with and the crowds have been unbelievable.

“We wanted nothing more than to perform tonight but when it's physically impossible to sing then our hands are tied. We are so sorry for this and we hope you understand we have done everything we possibly can in the last 48hrs to make this show happen.

This is the second time this year that the band has been forced to cancel due to vocal problems for Sykes. In July, they pulled out of the Provinssirock Festival in Finland claiming that a doctor advised vocal rest for Sykes due to illness. – Staff Writers