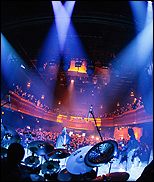 Located in the city's East Village, Webster Hall has operated as a venue since 1886. Designated as a historic landmark by the city, Webster hall includes the Grand Ballroom, The Studio, and The Marlin Room live entertainment spaces and is one of the top club venues worldwide for ticket sales.

“We are excited to build on the iconic history of Webster Hall,” said Brett Yormark, CEO of Brooklyn Sports & Entertainment. “Webster Hall provides us with an extraordinary opportunity to connect with artists early in their careers and expands BSE’s venue footprint into Manhattan. We appreciate all that the Ballinger family has done to make Webster Hall an industry-leading venue and we are looking forward to working with them, The Bowery Presents and AEG Presents to make it an even greater destination for live music.”

Webster Hall has undergone several waves of transformation throughout the past century. In the 1920’s, Webster Hall notoriously held masquerade balls and was nicknamed the “Devil’s Playhouse.” RCA Records purchased Webster Hall in 1954 and renovated the venue to include a state-of-the-art acoustically treated ballroom. Notable artists who recorded in Webster Hall’s studio during this time included Elvis Presley, Frank Sinatra, Bob Dylan (his recording debut), Harry Belafonte, Tony Bennett, and Julie Andrews.

Beginning in the 1980’s, Webster Hall developed a reputation as one of the top rock venues in the City, hosting artists such as Eric Clapton with Keith Richards, U2 (for the band’s first-ever US show), Tina Turner, The Beastie Boys, The Pretenders, Prince, Sting, Metallica, Aerosmith, KISS, B.B. King and Guns N’ Roses.

The financial terms of the deal were not disclosed. – Staff Writers