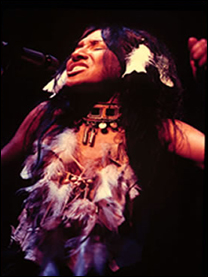 Additional Special Honour awards will be presented at the annual event, which salutes the best of Aboriginal music in Canada, to Terri-Lynn Williams-Davidson, who will receive the Keeper of Traditions in Aboriginal Music award and Bruce Ruddell, who was chosen as this year’s Music Industry Special Honour recipient.

Lifetime Contribution to Aboriginal Music award recipient Buffy Sainte-Marie has been synonymous with Canadian Aboriginal artistry for more than four decades. An Academy-award winning composer, Ms. Sainte-Marie’s illustrious career spans more than four decades as a musician, visual artist and social activist. After being named Billboard Magazine’s Best New Artist for her first album she has gone on to receive numerous accolades including Juno and Gemini awards and Lifetime Achievement awards from the Saskatchewan Recording Industry Association, the American Indian College Fund, the National Aboriginal Achievement Foundation, and the Canadian Academy of Recording Arts and Sciences. She is an Officer in the Order of Canada, was awarded the Queen’s Jubilee Medal in 2002 and has been a spokesperson for UNESCO.

Haida singer Terri-Lynn Williams-Davidson was chosen to receive the 2008 Keeper of Traditions in Aboriginal Music award, which is presented to an individual dedicated to teaching Aboriginal culture through music. A passionate promoter of Haida music since the age of 13, Ms. Williams-Davidson began singing Haida songs at a time where there were few Haida singers practising this musical tradition. Since becoming the lead singer in a children’s Haida dance group she has become a student of the southern songs of the Haida nation, and gone on to found the Haida Gwaii Singers Society, which is assembling the Songs of Haida Gwaii Legacy Project in partnership with the Haida Gwaii Museum.

The Music Industry Special Honour is presented to an individual, Aboriginal or non-Aboriginal who is making or has made a significant positive impact on Canadian Aboriginal music, and this year’s recipient is composer, arranger, music director, conductor, writer and artistic director Bruce Ruddell. Mr. Ruddell earned this accolade through his 30 year commitment to the exposure of Haida music across various artistic disciplines, including film, stage, symphony, opera and full scale concert presentations. Mr. Ruddell continues to be active within the community, producing a 13-CD box set of Haida recordings for the Haida Gwaii Singers Society, collaborating with Dene performance artist Marie Clements to bring an Aboriginal perspective to the story of American photographer Edward Curtis, and preparing for an early 2009 Vancouver performance of Vigil, a 30-minute mixed chorus, piano and string quartet piece he wrote to honour the missing and murdered women on Vancouver’s east side.

Winners of the CAMAs’ 26 juried prizes will also be handed out as part of the event, which will feature performances by Aboriginal performers from across Canada. Leading the nominations for the 2008 CAMAs are country star Crystal Shawanda and roots rockers Eagle & Hawk, with five nods each. –by CelebrityAccess Staff Writers