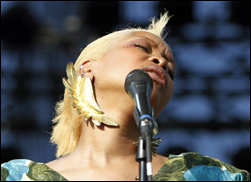 ATLANTA (CelebrityAccess MediaWire) — Erykah Badu found out that the 11 PM cutoff time at the Chastain Park Amphitheatre is no joke.

According to the Atlanta Journal-Constitution, the singer found power abruptly cut off in the middle of her August 14th performance at the venue.

To be fair to venue staff, she did turn up late, leaving the audience to stew in their seats for over an hour after the opening act, Bilal finished his performance. After an hour, Badu's band took to the stage, sans Erykah, and performed an instrumental groove for 5 minutes before the singer finally made an appearance.

Although the performance was apparently a good one (The AJC used adjectives like 'smoldering'), venue staff killed the amps promptly at 11PM, leaving Badu apparently surprised and her fans booing. – CelebrityAccess Staff Writers