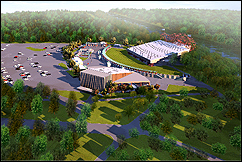 CINCINNATI (CelebrityAccess MediaWire) — The Cincinnati Symphony Orchestra will build an additional pavilion at Riverbend Music Center, its summer home on the banks of the Ohio River. National City has purchased the 10-year naming rights to the new 4,000-seat venue, The National City Pavilion. Terms of the sponsorship are not disclosed.

The National City Pavilion at Riverbend Music Center will be located adjacent to the box office on the northwest exterior concourse of the Riverbend complex and is expected to be completed by June 2008. A portion of the land has been generously provided by Coney Island and the Walker family. Initial groundbreaking will coincide with the opening of the summer season in late May with heavy construction to begin in September 2007. Messer Construction has been contracted for the project and specific designs are being created by GBBN Architects. Construction will not impact the summer 2007 season at Riverbend.

"This is an investment for the CSO," said CSO President Steven Monder. "The National City Pavilion, like the J. Ralph Corbett Pavilion at Riverbend, will generate new revenue for the orchestra. It also will generate economic impact and allow us to present additional entertainment options for the region."

"A 4,100-seat venue fills a niche in the market," said Director of Riverbend Michael Smith. "The National City Pavilion meets the needs of a rapidly changing industry. This state-of-the-art facility makes Riverbend one of the only concert venues in the country offering both a large amphitheater and a more intimate pavilion, which is a great competitive advantage."
The National City Pavilion at Riverbend Music Center is expected to have an economic impact of $4.4 to $5.5 million per year. Riverbend's current economic impact is approximately $20 million per year.

Estimated to cost $6.8 million, the project is fully funded. This is a particularly efficient project because much of the infrastructure is already in place at Riverbend – the land, parking lots, roads, restrooms, box office and concession stands.

The State of Ohio gave the CSO $3.25 million from its Capital Budget to help finance this project. The balance of the funds has been privately raised.

"We greatly appreciate the support of the State of Ohio through the capital budget process, particularly the Greater Cincinnati delegation which ensured that we could secure this key funding," said CSO Board Chairman Rick Reynolds. "The CSO was able to make a strong case for this investment, demonstrating increased summer employment and positive return on that investment. We also thank National City for taking this tremendous leadership role in providing the necessary sponsorship investment. National City is truly helping to enhance the quality of life in the region. We appreciate their sponsorship."

The current J. Ralph Corbett Pavilion at the Hulbert Taft Jr. Center for the Performing Arts (Riverbend Music Center) has a capacity of 20,000. Riverbend Music Center is the summer home to the Cincinnati Symphony and Pops Orchestra. There are no immediate plans for either orchestra to perform in the new venue.