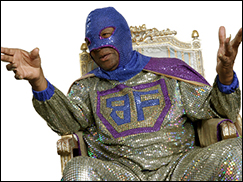 
Manager and drummer Tom Bowker posted to Reid's Facebook page with this accolade to the late rapper "the genius known both by his given name and as Blowfly, the Master of Class, passed peacefully today."


Bowker wrote earlier that week that Reid had entered hospice care due to terminal liver cancer and multiple organ failure.


During the 1960s and 1970s Reid wrote for and produced artists including Betty Wright, Sam & Dave, Gwen McCrae, Jimmy "Bo" Horne, Bobby Byrd, and KC & the Sunshine Band. During this period he was also a recording artist, cutting many of his own songs, including "Nobody But You Babe."


Reid wrote sexually explicit versions of hit songs for fun but only performed them for his friends at parties or in the studio.


He toured sporadically and recorded occasionally. The Weird World of Blowfly, directed by Jonathan Furmanski, premiered at South by Southwest in 2011 and received a wider release in September 2011.


On the day of his death names of the Industry such as Ice-T wrote farewells on social media to the rapper.


"RIP and respect to the ORIGINAL. 'Blowfly,'" Ice-T wrote on Twitter.


Red Hot Chili Peppers bassist Flea meanwhile wrote: "I had the great privilege of playing with BLOWFLY. So much joy. R.I.P. Clarence Reid."


But the world has not heard the last of Reid, who apparently had prepared a final album to be released posthumously.


"Blowfly has gifted us a final album, entitled '77 Rusty Trombones' which is set to be released February," Bowker said on Facebook.


"His sister Virginia and I thank you for all the love you have shown this week," he wrote.