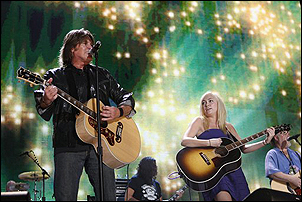 NASHVILLE (CelebrityAccess MediaWire) — It was another big year for the CMA Music Festival, with record crowds increasing 9.4 percent for the four-day event over last year. This breaks down to a daily attendance of 52,000, up from 48,000 in 2007.

"Even with gasoline prices around $4 a gallon and weak economic conditions around the country, we saw an increase in our attendance on every level from local and regional participation to those fans that traveled from around the world," said CMA Chief Executive Officer Tammy Genovese. "I believe that speaks to the strength of the event, the popularity of our artists, the dedication of our fans, and the entertainment value of the Festival."

Although the event was replete with a panoply of today's top names in country music, festival organizers credit local performers for bolstering the numbers and point to increases in single-day tickets as evidence that more local residents made the scene.

Pre-show activities included the presentation of the Stars and Stripes by the United States Marine Corps Recruiting Station Nashville Color Guard and a fly over with FA-18s from The Bengals of VMFA from Marine Corps Air Station, Beaufort, S.C., a tradition that was a crowd-pleaser all four nights. Lyric Street recording artist and season six "American Idol" finalist Phil Stacey sang the national anthem, and Nashville Mayor Karl Dean officially welcomed fans to Music City for the 37th annual event, which began as Fan Fair in 1972.

Phil Vassar and Jo Dee Messina got the 2008 CMA Music Festival off to an energetic start Thursday morning during the kick-off concert at Riverfront Park. Fans were waiting before dawn to for the event to start.

Though the evening marked Hill's first performance at the Festival in 10 years, she insisted that her appearance felt like a family event. "Well, it's a short drive," she joked. "And my kids are at home, so I kind of feel like I'm off tonight."