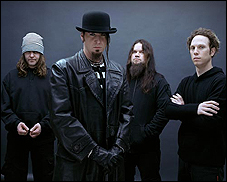 According to the Rocky Mountain News, the incident occurred at The KBPI-FM (106.7) "Birthday Bash," held in March 2006 at Magness Arena on the campus of the University of Denver. As the band Mudvayne took the stage, LaScalia fell in the press of general admission fans crowding closer to the stage and had both her tibia and fibula fractured in addition to badly injuring her ankle. According to her lawyer, Darrell Elliot, she sustained 60,000 in medical bills and "severe pain and suffering."

"Something like this is reasonably foreseeable," Elliott told the Rocky Mountain News "There has to be sufficient supervision if you have festival seating to protect patrons. In this case, it didn't happen. Oversight was lacking."

Law suits brought by fans injured in the press of crowds at concerts and events has become increasingly a concern for venue owners and promoters.

"It is the duty of not just the venue but the promoter to make sure the people they invite, the concertgoers, are at a reasonably safe show," Paul Wertheimer, who runs Crowd Management Strategies in Los Angeles told the Rocky Mountain News "You can't make it perfect, but you can try to prevent these things from happening."

According to Wertheimer, the number of lawsuits has been on the rise as injured fans increasingly realize the merits of their arguments. On the other side of the coin, a small clutch of attorneys has made a "cottage industry" of suing promoters and venues. Both of these factors will likely lead to event organizers increasingly cracking down on such activities as crowd surfing and "moshing" at public events.

"The very nature of heavy metal music is that mayhem prevails," said attorney David Hansen "It's up to the venues to keep it under control. They are now very much aware of the risk. Then it becomes a matter of controlling it." – CelebrityAccess Staff Writers