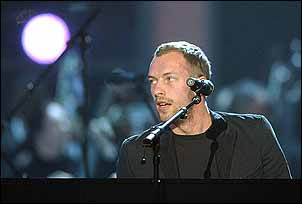 "Speed of Sound," the first single from Coldplay's forthcoming X&Y, is #1 on
all iTunes Music Stores worldwide one day after its release. "Speed of
Sound" had an incredible rise globally on the iTunes Music Store achieving
the #1 position on all 15 stores: Austria,
Belgium, Canada, Finland, France, Germany, Greece, Ireland, Italy,
Luxembourg, Netherlands, Portugal, Spain, the United Kingdom, and the United
States.

"'Speed of Sound's' #1 iTunes Music Store debut confirms that the worldwide
anticipation for new Coldplay music is undeniable," said Andrew Slater,
Capitol Records' president & CEO. "As great as expectations are for this
release, excitement will be met with a career-defining album from Coldplay."

"Coldplay's 'Speed of Sound' has been a hit with music fans topping iTunes
charts today in every country, only a day after it's release," said Eddy
Cue, Apple's vice president of Applications. "With iTunes' extensive reach,
there's no faster way to bring a pre-release track like this to fans around
the world."

"Speed of Sound" went to radio on April 18; the companion video for the single
will be directed by Mark Romanek. Coldplay will headline the first day of
the Coachella Music Festival in Indio, CA on April 30. Following
the release of X&Y, Coldplay will embark on their biggest world tour yet,
beginning with dates in Europe, the UK and Ireland. Plans are in the works
for a 40-city North American summer tour. –Bob Grossweiner ans Jane Cohen