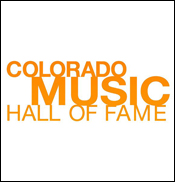 
The induction ceremony will take place at a dinner held at the Sunday, Feb. 12, 2012 at 3:00 p.m. at the Dal Ward Athletic Center (on the north end of Folsom Field on the CU Boulder campus). The awards dinner will include entertainment as well as exhibits and archival photographs that will eventually be relocated to CMHOF’s home at 1stBank Center in Broomfield.


Fey, founder of Feyline Productions and his Family Dog concert hall, was a noted promoter, producing shows by performers ranging from Janis Joplin and the Rolling Stones to Led Zepplin and The Doors.


Harry Tuft has been a leading figure in folk music in North America for decades, and founded the Folklore Center in Denver in 1962. Tuft brought many folk artists to Colorado, including Joan Baez after her Red Rocks appearance with the Beatles at their Aug. 26, 1964 date. A multi-instrumentalist, Tuft formed Grubstake in 1972 and made several albums with his band mates Steve Abbott and Jack Stanesco; he has recorded as a solo artist as well.


Tickets for the show are currently on sale at outlets in the Boulder and Denver region. A portion of the proceeds will go to the Colorado Music Hall of Fame, a non-profit organization that benefits the CU School of Music. For more information, at www.coloradomusichalloffame.org. – CelebrityAccess Staff Writers