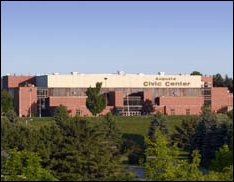 AUGUSTA, Maine (CelebrityAccess) — Recently opened venues in Bangor such as the Darling's Waterfront Pavilion and Cross Insurance Arena have made concerts an increasingly rare event at the nearby Augusta Civic Center, with shows that used to go to the civic center in Augusta now being presented at the larger, privately owned venues in neighboring Bangor.

“Bangor, their niche right now is the concert industry, and that’s hurting us,” Dana Colwill, director of the Augusta Civic Center told the Portland Press-Herald. “The waterfront, once it was developed, can hold 16,000 people. We can’t compete with that, with 6,000 seats. The Cross Insurance Center holds 8,000. We can’t compete with that. We’ve had some Christian rock shows and Mannheim Steamroller last Christmas, but not the major concerts that draw a lot of attention – all, in my mind, due to the new Bangor facilities.”

Colwill also pointed to the influence of companies such as Comcast-Spectacor, which operates Cross Insurance Arena, in booking events.

“They’re huge,” Colwill said of the company. “So, bottom line, the management company in Bangor has got all these contacts and resources which, as just some guy in Maine, I don’t have.”

Fortunately for the August Civic Center, their focus on conventions, banquets and trade shows allows the building to break even, which is more than most publicly owned facilities can claim.

“The 10-year trend is it has basically broken even, but last year it lost $163,000,” Ralph St. Pierre, finance director and assistant city manager told the newspaper. “The numbers are getting better, but we’re still trying to recover from the recession. We think, over the next few years, they’ll become profitable enough to pay that back.” – Staff Writers