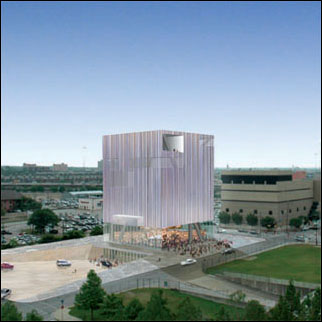 DALLAS (CelebrityAccess MediaWire) — According to Playbill.com, an arts venue billed as the most significant performing arts campus since Lincoln Center is will open in Dallas in 2009.

It will also host visiting music, opera, dance and theatre companies from around the world.

"The Center's venues will be woven together by a 10-acre public Performance Park, which will embrace and unify the venues within a lush urban oasis and create a dynamic cultural destination in downtown Dallas," according to developers.

Designed by landscape architect Michel Desvigne of Paris, "the Park is envisioned as one of the most exciting and dramatic new civic spaces in the region."

The first public park in the Dallas Arts District, Performance Park will include hundreds of trees, expanses of grass and a series of gardens, fountains, reflecting pools, promenades and walkways.

The Dallas Center for the Performing Arts' venues will include:

Annette Strauss Artist Square-a new home for the city's premier outdoor performing arts venue, also designed by Foster and Partners, able to accommodate audiences of up to 5,000 "in a serene open-air setting."

The Dallas Center for the Performing Arts has raised more than $221 million toward its capital campaign goal of $275 million.

The campaign was publicly launched in 2000 and has received more than 80 percent of its funding from individuals who in the past have not previously been supporters of the arts.

The Center has received 96 gifts of $1 million and above.

Additionally, $18 million in bond funds were approved towards the project by Dallas voters in 2003.

The creation of the Dallas Center for the Performing Arts continues a tradition of unprecedented civic investment in Dallas. The Center "joins a number of distinguished visual and performing arts institutions in the Dallas Arts District, whose range and depth make it a destination for the arts that is unparalleled in the world.”

A unique, 17-block, 61.7-acre neighborhood in the heart of the city's commercial center, the Arts District was established in 1983 as an initiative to make the Dallas arts community more accessible.

Anchored by the Dallas Museum of Art, designed by Edward Larabee Barnes (1984); the Morton H. Meyerson Symphony Center, designed by I.M. Pei (1989); the Nasher Sculpture Center, designed by Renzo Piano (2003); and the Booker T. Washington High School for the Performing and Visual Arts, currently building a new facility designed by Brad Cloepfil (2007), the neighborhood serves as the foundation for creative vitality throughout the region.

The opening of the Center in 2009 will complete the vision of the Arts District, establishing a self-contained, pedestrian-friendly "village of the arts" in the heart of the city's commercial center and establishing Dallas as the only city in the world with buildings designed by four Pritzker Prize-winning architects in one contiguous block.

"The creation of the Dallas Center for the Performing Arts is an investment in the cultural life of our city," said Bill Lively, president and CEO of the Dallas Center for the Performing Arts. "As Dallas continues to grow, the arts play a central role in our community and are an outstanding resource for visitors to our city. This new Center ensures that future generations in Dallas and the region will have access to the best music, theatre, opera and dance from throughout the world."

The Dallas Center for the Performing Arts will provide new state-of-the art homes for a number of Dallas-based performing arts organizations dedicated to opera, theatre, ballet and other forms of dance. The Center's new venues will advance the development of its resident companies, foster the cross-fertilization of audiences and encourage interdisciplinary collaboration among the various arts organizations it houses. The Center's resident companies will include:

The Dallas Opera-The Dallas Opera has presented the U.S. and world premieres of numerous operas as well as the American debut of many international stars, including Placido Domingo.

Anita N. Martinez Ballet Folklorico-an educational and performance-based dance organization dedicated to instilling cultural pride and awareness in the Hispanic community while educating the general public about the Hispanic cultural contribution to society.