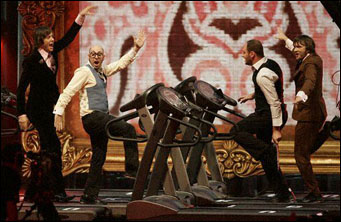 NEW YORK (CelebrityAccess MediaWire) — According to Billboard if there is one thing Capitol Records' alt-rockers OK Go have established, it's this: They know how to create a sensation on the Internet. But convincing fans to actually buy their music is proving an altogether trickier task.

The quirky Washington, D.C./Chicago-based band released a low-budget video for the single "Here It Goes Again" on YouTube July 31, and, for the second time in 12 months, became a prime example of how fast word-of-mouth about an act can spread in the age of viral video.

The clip is a novelty piece that features the group performing a choreographed routine involving eight treadmills. It attracted more than three million views on youtube.com in the first two weeks following its debut on the site. The band has been all over mainstream media, and appeared at the MTV Video Music Awards August 31, performing the routine.

But with all the buzz in place, next comes the hard part — transforming an online "hit" into actual sales.

OK Go can attest firsthand that creating a lightning strike of massive Internet popularity does not automatically result in increased digital track and CD business. A year ago, the band sparked a similar sensation with the video for the song "A Million Ways" — a clip that has been viewed more than nine million times worldwide in the last year.

What follows is a chronicle of how one band scored on the Internet, and then learned how to respond.

OK Go records its second album, "Oh No," in Malmo, Sweden, with Tore Johansson, who previously worked with Franz Ferdinand and the Cardigans.

While on tour in Toronto with the Kaiser Chiefs, the members of OK Go — lead singer/guitarist Damian Kulash, bassist Tim Nordwind, drummer Dan Konopka and guitar/keyboard player Andy Ross — give a video copy of a dance routine for the song "A Million Ways" from their new album to a fan. They had teamed with Kulash's sister Trish Sie, a former professional ballroom dancer, to choreograph the number and intended to perform the dance at the end of live shows. In mid-May, the band had filmed one of the rehearsal sessions in the backyard of Kulash's Los Angeles home.

After OK Go distributes an official link to the "A Million Ways" video to its online street team and various music blogs, the influential blog Music for Robots posts the clip. Around the same time, the clip starts popping up on LiveJournal blogs and MySpace pages. On June 28, Capitol goes for adds for "Do What You Want" at radio.

Following an Entertainment Weekly plug for the video in the "Must List" of its July 15 issue, the band, emboldened by the viral success of "A Million Ways," decides to make another low-budget choreographed video with Sie — one that will outdo the first clip. So while on a stopover in Orlando, Fla., OK Go films a video for the song "Here It Goes Again," another track from the forthcoming "Oh No." The clip features the band performing a synchronized dance routine on eight treadmills. The band opts to hold on to the clip for release at a later date.

The band launches a Web site dedicated to the video and song called a1000000ways.com (now defunct), after including a link to the "A Million Ways" video on its Web site earlier in the month. Meanwhile, Web popularity of the clip continues to grow. The video is added to Fuse's "Oven Fresh" initiative August 19, Yahoo Music's "Dig It or Dis It" program August 22 and the VH1 Web site August 26. The week of August 30, when Capitol releases "Oh No" and the band is featured in an NPR story about the video, "A Million Ways" ranks No. 3 on iFilm. Since its debut in June, the video has generated more than 500,000 views across the Web.

The band performs "A Million Ways" on "The Tonight Show With Jay Leno," kicking off a media blitz in connection with the album release in which they next do the song September 9 on "Mad TV." But despite the surging viewership for "A Million Ways," the video is never formally submitted to MTV or VH1.

"We never got a giant push from them to play it. There was just all this hoopla around the Internet activity," says Rick Krim, executive VP of music and talent for VH1. "Between YouTube numbers and MySpace numbers, we get so many giant numbers thrown at us these days sometimes it is hard to know what's even good anymore. The bar keeps getting raised."

Opening week sales for "Oh No" total 7,000; digital track sales for "A Million Ways" total 1,000 downloads. But sales of the album and the track quickly fall off. Meanwhile, "Do What You Want" produces little traction at radio, and the accompanying video is not picked up by the music video channels.

The "A Million Ways" video is featured on VH1's "Best Week Ever" as online views top 1 million. A week later, the band and a handful of its fans perform the dance on "Good Morning America," and "A Million Ways" tops MTVu's countdown show "The Dean's List."

By the end of November, the video has been streamed more than 3 million times. With "Do What You Want" going nowhere, Capitol finally releases "A Million Ways" to radio.

"We tend to forget that six months ago it wasn't so obvious that YouTube was a phenomenon," acknowledges Jamie Kitman, OK Go's manager and president of the Hornblow Group U.S.A. in Nyack, N.Y. Supporters of the song include WFNX Boston; WEQX Albany, N.Y.; and WWCD Columbus, Ohio.

Fan tributes to the video start surfacing on YouTube and other viral-video sites from as far as away as Vietnam. But there's a growing frustration that all the enthusiasm for the video has not resulted in meaningful sales for either the album or the single — even in markets like Boston where the song is getting spins.

"We kept saying: 'All signs point to the hit,"' Kitman says. "But there were questions: Do people love the song, or do they really just love the video? Do they even know it's a band? We never really knew."

By December, sales of "Oh No" total about 1,000 units per week while download sales of the single total less than 1,000 per week. Neither the single nor the video are reacting at radio or on video channels on a wide-scale basis either.

Ready to move on to a new single, Kitman screens the "Here It Goes Again" video with Capitol executives in Los Angeles. But this time the band doesn't want to just create another viral-video hit. Anticipating a similar sensation, they want to line up radio, retail and video support in advance.

But the label and management are divided over strategy. Capitol, sensing the same uphill battle it faced at alternative radio with "A Million Ways," wants to focus on another track, "Oh Lately It's So Quiet," in an attempt to break the band via the hot AC format. Capitol also voices concerns that the "Here It Goes Again" video, like "A Million Ways," may be too low tech for MTV/VH1 support. At the end of the month, Kitman meets with EMI vice chairman David Munns in New York to discuss the challenges OK Go has faced in trying to monetize "A Million Ways."

The band performs on "Jimmy Kimmel Live," then on DirecTV's CDUSA the next day, but frustration mounts as U.S. sales remain soft. After touring on its own for the last year, OK Go lands an opening slot on the Motion City Soundtrack tour. The single for "A Million Ways" is released February 13 in the United Kingdom, but the track stalls on the charts at No. 43. "Oh No" is released February 27 in Britain.

Kitman meets with VH1 GM Tom Calderone to screen the "Here It Goes Again" video, thinking there still might yet be hope for the clip and the song. The radio push on "Oh Lately It's So Quiet" having stalled, Kitman lobbies Capitol for a new single to work to alternative radio.

With online views now in the multimillions, the video for "A Million Ways" is made available on iTunes almost a year after it first appeared online. A source familiar with the situation says timing of the iTunes video store and soft sales of the track slowed the urgency to get the video posted.

Panic! At the Disco's latest tour kicks off with OK Go in the opening slot. In early June, Capitol also releases the song "Invincible" to alternative radio; OK Go makes a video to accompany the track. Meanwhile, tensions are rising between the band and the label over the "Here It Goes Again" video. Capitol, in an attempt to increase awareness for OK Go, leaks "Here It Goes Again" to a handful of viral-video sites including MySpace and stupidvideos.com. The band — still hoping to use "Here It Goes Again" as a single — immediately demands that Capitol pull it. Kitman doesn't want to release the video online until radio, retail and MTV are lined up.

"People for a while have been talking a good game about the Internet and their readiness to deal with the new technology, but the reality is they were slow to catch up. It's hard to figure out how to harness it," he says. "The lesson that we've learned is when you see something catching on you need to bring some conventional artillery out and do the things you do when you have a radio hit."

At the end of June, the band licenses the song and video for "Do What You Want" to JCPenney for use in a commercial.

In a key turning point, VH1 adds the "Here It Goes Again" video to its top rotation tier.

"We had a narrative that we thought made this second video a big deal," Kitman says. "We had the biggest Internet video hit, now comes the follow-up."

Calderone and Krim commit to play the video more than 50 times per week by the week of September 4 — 50% more than the next-highest-played video. Capitol responds by committing to ship an additional 100,000 units to retail. At the same time, exposure from the JCPenney ad causes an uptick in the band's SoundScan numbers. Sales of "Oh No" increase more than 50% between the first and last week of July.

"The Early Show" aired a segment on the video August 3; the video was added to the rotation at Fuse August 6; a "Good Morning America" segment about YouTube spotlighted the video August 9. Meanwhile, Capitol used its presence at the NARM conference to set up price-and-positioning programs with the likes of Target and Best Buy.

MTV adds OK Go to its lineup of performers for the August 31 Video Music Awards in New York.