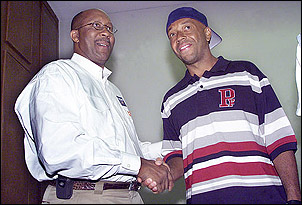 The Hip-Hop Summit Action Network (HSAN), which held its first major Summit
in New York in June 2001 and

Under the theme of "Taking Back Responsibility:Empowering our Youth," a
special effort to increase youth involvement resulted in a tremendous
response from over 1,000 young participants. HSAN made the decision to convene
in Dallas as a result of an invitation from hip-hop legend and Dallas native, the
D.O.C., who was so moved by the L.A. Summit he attended.
The official radio station of the Dallas Hip-Hop Summit was 97.9 THE BEAT, a
Radio One affiliate.

At the conclusion of the two-day meeting, the Dallas-Ft. Worth Hip-Hop
Summit Action Network Youth Council was established, spearheaded by the
D.O.C., whose mission it is to coordinate programs utilizing hip-hop culture
to improve the quality of life of communities in the Dallas-Ft.Worth area.

"It was humble beginnings for great things to come for Dallas-Ft.
Worth," commented the D.O.C. "The children are the key. We gotta get them
now, while they're young or they're going to be plum out of luck. Without
the older folks caring about the younger folks and the middle-aged folks
caring about the older folks, none of it is going to work. Everyone has to
get on the same page. After the turnout at this Summit, maybe the people of
Dallas will take that more seriously and we can really make a change here.
I'm committing myself to making sure that happens."

Russell Simmons noted the growing positive influence of hip-hop on society.
"Jay-Z is more influential than Colin Powell and the large number of youth
here today at the Hip-Hop Summit proves that young people are interested in
changing society for the better" Simmons stated.

"The Dallas Hip-Hop Summit was a powerful statement from the grass roots,
indicative of the return to greater social conscious in the evolution of hip-hop,"
added Minister Benjamin Muhammad. "Young people are standing up
and young people are speaking out and it is our responsibility, through the
Hip-Hop Summit Action Network, that the voice and the interests of the youth
are served."

Erykah Badu introduced her latest video, "The Love Of My Life," which is
included in the soundtrack of the newly released hip-hop movie, "Brown
Sugar." In Badu's address to the Summit, she chronicled the historical
development of hip-hop and noted that hip-hop is about speaking the truth
and not being silent in the face of injustice. "We need to bum rush the
system with truth," commented Badu.