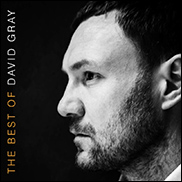 (Hypebot) –As music consumption shifts to streaming, artists and labels are experimenting with how to use the new medium to release music in different ways. Kayne West remixed and added trax in the first days of his recent Tidal digital release. Drake, DJ Kahled and others each have their own strategies. Now, David Grey has partnered with Spotify to release a "Best Of" album that changes based on fan interest.

At a time when streaming services offers fans access and self-curation to an artist’s digital archive, does a "Greatest Hits collection" retain any value?

It’s a question that David Gray and label services firm Kobalt posed when considering how best to compile a present-day representation of his large catalogue of hits, which is already being streamed over a million times a week.

The result – ‘Best of David Gray Weekly’– is a dynamic Spotify playlist, which that will change weekly to reflect the most streamed tracks in his catalog. As this playlist fluxes new tracks like ‘Smoke Without Fire’ will change position with classics like ‘Shine’ which Grey re-recorded as a 25th anniversary version especially for this release. Kobalt calls it not The Greatest Hits, but rather Your Greatest Hits.

“What we have on our hands with ‘The Best Of David Gray Weekly’ is an ever evolving Best Of that is different every week, every month, every year, every decade," says Grey of the weekly playlists. "The more you stream a track, any David Gray song, the higher in the playlist it appears”.

“In re-imagining the ‘Best Of’ album for the streaming age," said Spotify’s Chris Stoneman, "they’ve provided a better experience for fans, whilst creating opportunities for the artist”. KobaltLOGO

A multi-format physical release of "The Best Of" is scheduled for October 14th through Kobalt Label Services/IHT Records. You can sample the Spotify playlist here or through David Gray’s website smarturl.it/DavidGrayWebsite.