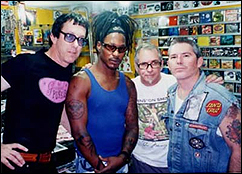 Dead Kennedys have pulled out of the "Waking The Dead" show at the Grand Olympic Auditorium in Los Angeles on October 29. The event will go ahead as scheduled without the band but will include Suicidal Tendencies, the Germs, Flipper and Marky Ramone as previously announced.

A Google search of Coors will turn up information on Coors that for years has funded right-wing groups such as the Nicaraguan Contras, the anti-gay Moral Majority, and the notoriously anti-punk Parents Music Resource Center (PMRC). Coors has also broken numerous unions, is anti-environment, and has funded lawsuits against affirmative action. More about the company can be found at www.corporations.org/coors.

"Dead Kennedys have always been wary of corporate sponsorship and steer clear of lending our name to promote a product," said Dead Kennedys guitarist and founding member East Bay Ray. "Because we were not alerted to the ultra conservative, right-wing sponsor for this event, we could not see a reason to go ahead and perform at this show in good conscience. Dead Kennedys want nothing to do with this event or Coors and I am disgusted that they are now sponsoring punk shows, something they are politically at odds with."

The band is releasing the special 25th anniversary edition of their classic "Fresh Fruit For Rotting Vegetables" on October 25. –Bob Grossweiner and Jane Cohen