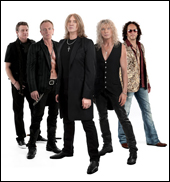 LOS ANGELES (CelebrityAccess) — Even though Def Leppard has been forced to postpone the remaining dates on their U.S. tour to let the band's frontman Joe Elliot rest his voice, the group expects the hiatus to be brief.

The band announced earlier this month that they had to postpone the remainder of their tour on doctor's orders, postponing 10 dates remaining on the tour.

"A doctor stuck a camera down his throat the day we postponed the last show (Feb. 2 in San Antonio) and told him that if he didn't stop singing he'd have no career left. That's the bad news. The good news is that same doctor is equally confident that he does not need surgery of any sort. He just needs rest for a couple months. He should be fine," guitarist Vivian Campbell told Billboard.

The group says they plan to be back on the road to make up the postponed dates in May, with new tour dates in North America expected for June.

Campbell also said the band will probably not take seven years to release a new album, particularly after the success of their most recent release, the eponymously named album that came out in October and shot to the top of the Top Rock Albums, Top Hard Rock Albums and Top Independent Albums charts.

"I do think it's encouraged us a lot to the extent I think we'll see another record a hell of a lot sooner than the time between this one and the last one," Campbell told Billboard. "There's always stuff around. There's always ideas. Everyone in the band is reasonably prolific. With Leppard it's never the question of not having enough songs; it's a question of what kind of songs. Every Def Leppard album has to have all these different flavors and hit all these different marks. It's not a question of just showing up with a dozen rock songs. So that's what takes a lot of time." – Staff Writers