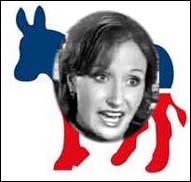 BURBANK, CA (CelebrityAccess MediaWire) — P2pnet.net news makes some statements about Jenni Engebretsen and the RIAA. They said that Jenni Engebretsen, a misinformation director with Warner Music, EMI, Vivendi Universal and Sony BMG's RIAA (Recording Industry Association of America), has been appointed deputy CEO for public affairs for the 2008 Democratic National Convention in Denver.

P2pnet.net news says that the RIAA is currently engaged in using university and college administrations to terrorize students into paying extortion money to avoid being sued by the RIAA.

Thirty-six University of Nebraska-Lincoln students were on the RIAA hit list. But the university system automatically changes a campus computer's IP address every time that computer is turned on, which stymied the RIAA.

Could the RIAA track them down some other way? "Probably not," the Omaha World-Herald had university CIO, Walter Weir, stating, going on, "If they can't give us any more information, I don't know how in the heck anyone can find 'em."

RIAA spinster Engebretsen, "criticized the university for failing to keep computer records that would have made it easy to track down the UNL offenders," said the story, quoting her as declaring:

"One would think universities would understand the need to retain these records."

Engebretsen's appointment isn't surprising. According to the Democratic National Committee press release, "Before joining the RIAA, Engebretsen spent eight years working in Democratic politics, most recently as a Regional Communications Director for the Kerry-Edwards for President Campaign, where she was responsible for developing campaign communications strategy for top-targeted states including Florida and New Hampshire."

P2pnet.net news writes “No wonder the campaign went down the tubes.”

"During the 2004 presidential cycle, she also served as Deputy Communications Director for the Democratic National Convention in Boston and as Press Secretary for the Edwards for President Campaign during the primaries," says the statement.

Interestingly, she's a graduate of Chicago's Northwestern University, the site for the first conference devoted to "discussing what the hell the RIAA is doing with its indiscriminate litigation," as Boing Boing's Cory Doctorow summed it up.

Doctorow has a list of the largest donors to the DNC for the past two election cycles on Boing Boing and, "If you know these people, you can contact them and urge them not to contribute to the DNCC," he suggests, going on:

Engebretsen's PR approach "is centered around stonewalling and avoiding difficult press calls. P2pnet.net news sought comment on this post from the DNC and from Jenni Engebretsen. Neither responded in time for initial publication."