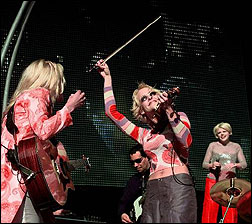 The Dixie Chicks and Sony Music Group have reportedly settled their differences with the group getting its own record label, Wide Open Records. The terms of the contract were not released, but the Los Angeles Times has reported some very lucrative numbers in favor of the Chicks–Emily Robison, Martha Seidel and Natalie Maines Pasdar.

The Firm, the trio's management, worked on a new contract, which the Times estimated at a $20 million signing advance. Interestingly, the Times reports that "the pact requires that the musicians reimburse Sony for about $15 million from record sales before collecting royalties. In addition, the trio's managers and lawyers are expected to reap fees estimated at $3 million, or about 15% of the $20-million transaction, sources said. Sony agreed to significantly boost the Nashville trio's royalty rate to about 20%, sources said."

The Dixie Chicks have sold nearly 20 million albums, generating more than $175 million in revenue for Sony since 1997. The Grammy-winning trio, which signed a seven-album deal with Sony in 1997.

The Dixie Chicks' lawsuit with Sony began in July 2001, after the trio sent Sony a letter that the act would no longer record for the company. Sony responded weeks later by suing them, alleging it was owed damages for five undelivered albums, the value of which the company estimated at more than $100 million.

A month later, the Dixie Chicks countersued, accusing Sony of engaging in "systematic thievery" to "swindle" recording artists out of royalty earnings.

In their suit, the country-pop singers said Sony cheated them out of more than $4 million by underreporting sales figures and overcharging for company services. Sony's "fraudulent accounting gimmicks" were uncovered, the suit said, during an audit, financed by the singers, of the company's financial records.

The singers said they caught Sony trying to hide money from them with bogus accounting tactics on 30 separate occasions since 1997.