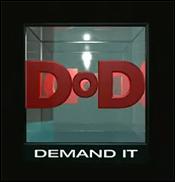 DoD and Clear Channel Entertainment Properties have signed Coca-Cola, General Motors and Reebok as founding partners for DoD, the first-ever all video-on-demand cable television channel targeting the hip-hop and urban market. DoD launched a free service on Comcast's ON DEMAND tier on November 11.

The Coca-Cola, General Motors and Reebok brands will be featured in ways that include sponsored programming, VJ personality segment integration, program presentation credits and branded program listings. These brands will also be featured in cross-promotional DoD marketing vehicles, such as cross-channel television spots, radio, print and online advertising, direct marketing and exclusive launch events and screenings.

"We've brought together the esteemed brands of Coca-Cola, General Motors and Reebok with the first-ever on-demand television channel targeting the influential, multi-cultural and lucrative Hip-Hop audience," said Bruce Eskowitz, president of Clear Channel Entertainment Properties. "DoD has figured out how to embed brands in an authentic manner into urban lifestyle programming and culture."

"Until now, there has been a void in hip-hop and urban television programming that speaks to fans in a real way," said Will Griffin, CEO of DoD. "We've focused on partnerships with brands that have a clear history of respect and support for Hip Hop culture and which share our desire to grow the presence of the Hip Hop culture on television." –Bob Grossweiner and Jane Cohen