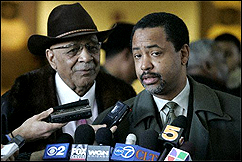 (CelebrityAccess MediaWire) — The proposed settlement between the owners of Chicago’s E2 nightclub and dozens of people trampled there in 2003 has been delayed, as attorneys for the Clear Channel-owned WGCI-FM radio station are fighting the plan.

In a court hearing last week, attorney Michael Freeborn said he does not want a settlement – provided through insurance policies – “to insulate” club owners Dwain Kyles and Calvin Hollins or Lesely Benodin, who owns the club property. Benodin in particular, Freeborn said, according to the Chicago Sun-Times, “has a lot of money” and his insurance “is not worth squat.”

Freeborn insisted that it would be unfair to leave Clear Channel and the City of Chicago as the only remaining defendants in the case, if the $1.5 million settlement should occur.

A Cook County judge is set to issue a ruling on the settlement next month, according to the paper. The city is accused of failing to assist patrons trying to escape after pepper spray filled the club during a fight. Twenty-one people were killed in the stampede at the E2.

WGCI is accused of promoting the event that night and providing a DJ who made comments that spurred the disastrous incident. –by CelebrityAccess Staff Writers