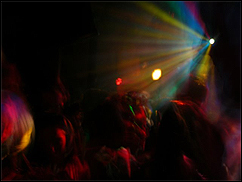 (CelebrityAccess MediaWire) — Federal lawyers have sent a letter to a Utah family, warning them to not repeat the mistake of hosting another rave festival on their property at Spanish Fork Canyon. A concert held on their land was raided by camouflaged police officers, who seized narcotics and other paraphernalia from attendees at the outdoor party.

“The United States has received information that you are again considering leasing your property for an outdoor music concert,” Stephen Sorenson, the acting U.S. attorney for Utah, wrote to Trudy Childs at the end of March, according to Salt Lake City Weekly.

“If you choose to lease your land again for another similar event, we can assure you that there will be drug trafficking on your property,” he wrote. “Your property can be civilly forfeited to the United States if it is merely used for or facilitates the distribution of narcotics.”

The letter arrived only days after the Childs rejected an offer from the federal government to buy the land they use for concerts.

The family’s attorney, Brian Barnard, called the letter “an intimidation tactic,” and claimed the Childs are being singled out.

“I attended the Rolling Stones and U2 concerts last year at the Delta Center, and my guess is there were probably drugs being used and probably people under the influence of drugs at both those concerts. Why don’t they send a letter to Larry Miller?” he asked the paper.

Sorenson told the City Weekly that similar letters haven’t gone out to other venues, because the concerts that cause concern at “raves.” Drug use “happens more in that setting,” he said.

A planned concert at the land this summer was the subject of the letter from the U.S. Attorney’s Office. The concert is not a rave, however, but instead a fundraiser for Parkinson’s disease research, most likely featuring rock, country or blues acts. The Childs still hope to hold the concert but have not set a firm date.

The family is not ready to give up their fight. “They don’t scare me,” Trudy Childs told the paper, adding there would be more concerts in Spanish Fork Canyon. “I don’t think they should be able to threaten us, saying we can’t do what we want with the property.” –by CelebrityAccess Staff Writers