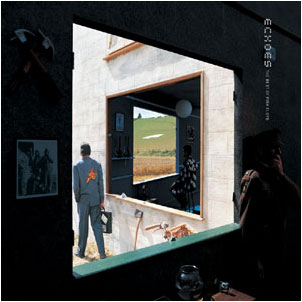 Pink Floyd's definitive two-CD, cassette and vinyl retrospective Echoes – The Best Of Pink Floyd, will be released November 6 on Capitol Records in the US and EMI in the rest of the world. Nearly 1 million Pink Floyd catalog albums are sold each year worldwide. On average, more than 8,000 copies of Dark Side Of The Moon are scanned each week in the U.S. alone, and Wish You Were Here and The Wall are also stalwarts on the Billboard Top Pop Catalog chart. Since the band's contemporary fans have long since replaced, or added to, their vinyl Pink Floyd collections with CD versions, clearly new generations are discovering the intense, cinematic, epic rock of Pink Floyd.

Here are other "echoes" continuing to be heard today:

Among all artists, Pink Floyd ranks #7 in number of albums sold in the U.S. (68.5 million), behind The Beatles, Led Zeppelin, Garth Brooks, Elvis Presley, the Eagles and Billy Joel

With the Oct. 13, 2001 edition of Billboard, Dark Side Of The Moon, released March 17, 1973, celebrated its 1,278th week on either the Top 200 Pop Album or Top Pop Catalog Album chart. No other album has stayed longer on any chart in history

Dark Side Of The Moon was initially in the Top 200 for 741 nearly consecutive weeks, more than 14 years (591 consecutive weeks from 1976-1987. Oddly, the album never reached #1 in the band's native U.K. and hit #1 in the U.S. for just one week (April 28, 1973. The album broke the six years-plus record of Carole King's 1971 landmark Tapestry. The previous champ of chart longevity was a 1958 greatest hits album from Johnny Mathis

In 1991, Dark Side Of The Moon returned to the charts after Billboard instituted its Pop Catalog category. The album not only went to #1 and established residency on that chart for the past 10 years but has remained almost entirely in the Top 10

Dark Side Of The Moon is tied for the fourth biggest selling album in Capitol Records history, behind only The Beatles, The Beatles 1967-1970 and Garth Brooks' No Fences

Available on vinyl and cassette since its release, Dark Side Of The Moon was one of the first albums to popularize CD technology, and has been available on compact disc since August 1984. In fact, its EMI CD label number is EMI001. The disc is one of the Top 10 best-selling CDs of all time

There is more to Pink Floyd than Dark Side Of The Moon and The Wall. Of the band's Capitol albums, Wish You Were Here (1975) also reached #1 and is six times platinum. Meddle (1971) is double platinum. Ummagumma (1969) is platinum. Three other Capitol albums are gold

*All chart and sales figures were culled from the Recording Industry Association of America (RIAA), Billboard and/or SoundScan.