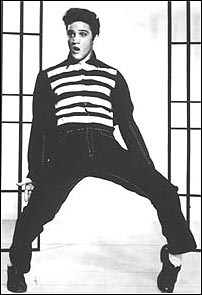 CKX and Cirque du Soleil have each agreed to pay one-half of the creative development and production costs of the new Elvis Presley show. CKX expects its portion of the investment to be approximately $24 million, with the largest amount expected to be funded in the later stages of development. Based on the past performance of existing Cirque du Soleil shows in Las Vegas (not including the recently opened “LOVE”), CKX believes that the new Elvis Presley show will generate approximately $15 million in revenue to CKX (without adjusting for inflation) starting with the opening of the show and continuing for a minimum of 10 years.

“I am pleased that during this time when we remember Elvis Presley and celebrate his life, we are able to announce his return to Las Vegas, a place where he truly rose to iconic status,” Robert F.X. Sillerman, chairman and CEO of CKX, Inc., commented. “And with the remarkable creative talent of Cirque du Soleil, fans who saw Elvis perform, as well as those who never had a chance to see him, will be able to experience Elvis in an entirely new and exciting way. This will be the first step in establishing a 21st century presence in Vegas for the King.”

Guy Laliberté, founder of Cirque du Soleil, added, “This new creative challenge is exactly what we strive at accomplishing in the development of our new productions. Cirque du Soleil is thrilled to be involved in CityCenter and we are particularly honored to be entrusted with this assignment. We are working closely with our partners to ensure the public will have an unforgettable encounter with the King of Rock and Roll. Elvis had a unique relationship with his adoring fans in Vegas and a large part of our mission is to recreate the excitement and the spirit of joy he generated here.”

Bobby Baldwin, president/CEO of Mirage Resorts, an MGM MIRAGE operating division, said, "With this show we will bring together Elvis, an icon of Las Vegas entertainment history, with CityCenter, a destination that represents the future of this remarkable city.”

The CityCenter will be located on 66 acres on the Las Vegas strip between the Bellagio and Monte Carlo resorts and is expected to include a 60-story, 4,000-room hotel/casino, two 400-room non-gaming hotels, 500,000 square feet of retail shops, dining and entertainment venues and approximately 2,800 luxury condominiums.

The Elvis Presley Las Vegas show is another step in the creative partnership between CKX and Cirque du Soleil, who entered into a worldwide arrangement for the exclusive creation, development, production, promotion and ownership of certain Elvis Presley projects, featuring touring and permanent shows, as well as multimedia interactive “Elvis Experiences” on May 18, 2006. Under the worldwide agreement, CKX and Cirque du Soleil expect by 2008 to open at least one touring Elvis Presley show in Europe and/or Asia and one “Elvis Experience” outside of the United States. Beginning in 2009, the parties expect that at least one Elvis Presley project will be opened in each of the next six years.

CKX Management hosted an investor conference call on August 17 to discuss the announcement. The call will be available for rebroadcast over CKX's website, www.ckx.com — Jane Cohen and Bob Grossweiner