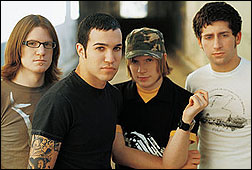 CHICAGO (CelebrityAccess MediaWire) — Fall Out Boy frontman Pete Wentz has been the subject of a lawsuit filed by a Chicago fan who alleges that the singer and ten of his bodyguards and entourage, assaulted the fan outside of a club.

The fan, Andy Kallas, alleges that he suffered "serious injuries to his head, mouth and face" during the attack, which occurred on July 12th of last year, outside of Chicago's Schuba's Tavern, which has also been named in the suit.

According to the Chicago Sun-Times, Kallas had been taunting Wentz during the show, allegedly mocking both his hooded sweatshirt and his relationship to Ashlee Simspon.

Kallas is looking to collect more than 200,000 in damages from the suit, to compensate him for his pain, medical bills, mental anguish, loss of normal life and disability to his body and mind. – CelebrityAccess Staff Writers